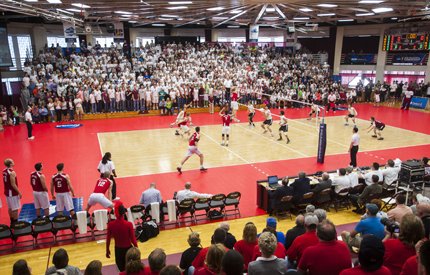 Springfield College has been selected as the host site for the 2017 NCAA Division III Men’s Volleyball Championship, announced on Wednesday afternoon on NCAA.com. The 2017 finals will be held April 28-30 at Springfield College's Blake Arena.

Bidding for 82 of 89 NCAA championships began in July and 1,984 bid applications were ultimately submitted. Each sport committee, per division, selected the host sites it believed would provide the ultimate experience for the respective student-athletes, resulting in 523 total championship event sites awarded.

“We are thrilled to once again have the opportunity to host the NCAA Division III Men’s Volleyball Championship," said Director of Athletics Cathie Schweitzer. "When we hosted the inaugural championship in 2012, it was an incredible event for our entire campus community and we look forward to once again putting together an event that will provide student-athletes with an unforgettable experience.”

Springfield College served as the host for the inaugural 2012 NCAA Division III Men’s Volleyball Championship, and the home squad captured the title in a three-game sweep of Carthage College. Last season, the Pride defended its national championship at Nazareth College in a three-set win over the host Golden Flyers.

"A great deal of work went into hosting the inaugural championship in 2012, and it's very exciting that the NCAA has selected the championship to be held in Blake Arena once again," said head coach Charlie Sullivan. "It was an electric and memorable weekend for our campus community, and we are honored to have been chosen."