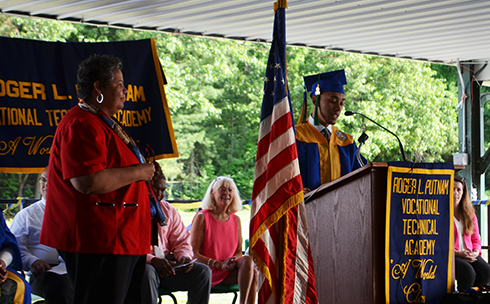 Bermudez is a member of Putnam’s Class of 2016 and has been a regular volunteer at the Liberty After-School Program in Springfield during his high school career. Bermudez was named the top student in his advanced placement biology class, and he has served as the 2016 senior class president. A MassMutual Academic Achiever with a near-perfect 4.0 grade point average, Bermudez will attend Springfield College with the goal of becoming a neurosurgeon.

“Springfield College was my first choice,” said Bermudez. “I practice the multicultural values that Jesse Parks embodied and I want to continue to do that in Springfield. I am so thankful for this scholarship and opportunity, and I am looking forward to serving my community.”

Simmons will attend Springfield College with a passion for physical education and health education, and will begin her quest of fulfilling her dream of becoming a physical education teacher. Known for her embodiment of showcasing school spirit, Simmons is determined to fulfill her academic and career ambitions in Springfield.

“I have dreamed about attending Springfield College since my childhood,” said Simmons. “Seeing the Humanics philosophy in action only reinforced my goal to apply for this prestigious scholarship.”

Springfield College established the Jesse Parks Scholarship 30 years ago through its commitment to expand educational opportunities to students from underrepresented ethnic groups in its home city.

Each year, the Springfield College Jesse Parks Scholarship Committee selects at least one student of color from Springfield who has demonstrated achievement in academics, cocurricular activities participation, involvement in community service, and commitment to the ideals of multiculturalism.

Additionally, he devoted his personal time to developing leaders in Africa and was deeply devoted to multiculturalism.  Parks worked to bridge gaps between people of all races, economic situations, and education levels in both developing and established nations.