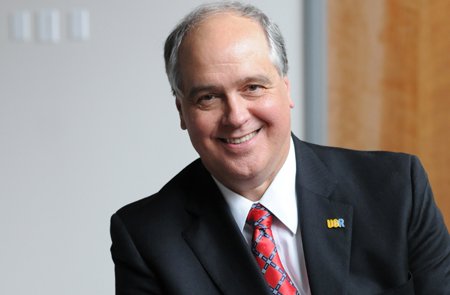 A leader in the field of medicine, Dr. G. Richard Olds, will deliver the commencement addresses at the Springfield College 2014 Commencement ceremonies. The undergraduate ceremony will take place on Sunday, May 18, at 9:30 a.m., at the MassMutual Center in downtown Springfield, and the graduate commencement ceremony on Saturday, May 17, at 9:30 a.m., inside Blake Arena on the main campus. Olds is the son of the eighth president of Springfield College, Glenn A. Olds.

G. Richard Olds’ speech is part of the 50th anniversary celebration of Martin Luther King Jr.’s commencement speech at Springfield College in 1964. The College has recognized this historic moment with a series of special events honoring Glenn A. Olds and King during the 2013-2014 academic year.

Spending his childhood, from ages 7 to 15, living in the Springfield College president’s home, Richard Olds was 14 when he witnessed one of the most significant chapters in Springfield College history when his father withstood harsh criticism to bring King to campus to deliver the 1964 commencement address.

Springfield College will present an honorary doctor of humanics degree to Richard Olds as part of the ceremonies. The College has historically awarded honorary degrees to a few outstanding individuals who, by their character and accomplishments, personify the Springfield College guiding philosophy, Humanics. Humanics emphasizes educating the whole person, in spirit, mind and body for leadership in service to others.

At its 2014 commencement, Springfield College will award bachelor’s, master’s, and doctoral degrees, and certificates of advanced graduate study.