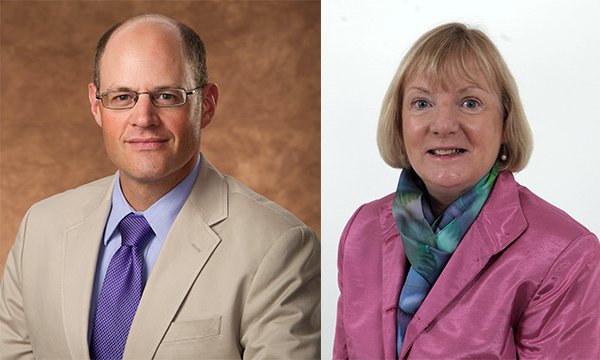 Andrew Seligsohn, president of a national organization dedicated to increasing campus-based civic engagement, and Ann Hope, public health specialist in the areas of alcohol and tobacco in Ireland, will deliver the commencement addresses at the Springfield College 2015 Commencement ceremonies. Seligsohn will address students at the undergraduate ceremony on Sunday, May 17, at 9:30 a.m., at the MassMutual Center in Springfield. Hope will speak at the graduate commencement ceremony on Saturday, May 16, at 9:30 a.m., on the College’s Naismith Green.

Seligsohn is the president of Campus Compact, a national organization dedicated to increasing campus-based civic engagement and the promotion of public and community service. The organization has more than 1,100 national and international member institutions, including Springfield College, and a diverse network of college and university presidents, faculty members, and staff members. Today, more than 98 percent of Campus Compact institutions have one or more community partnerships.

While at Rutgers, Seligsohn developed programs and strategies to align the institution with its community, including the Camden City Public Schools, for which he created the Rutgers North Camden Schools Partnership. This partnership is an afternoon and summer program that serves hundreds of students at three schools in Camden, N.J., and is centered around the creation of a vibrant learning community focused on providing guidance in the areas of science, technology, engineering, and mathematics.

Hope is currently a research associate at Trinity College Dublin and a specialist in alcohol and tobacco policy in Ireland. Hope’s dedication to alcohol research and policy development has led her to myriad career and professional opportunities. She has served as the national alcohol policy advisor for Health Service Executive, which runs all public health services in Ireland. She also was employed as the national alcohol policy advisor, coordinator for the national alcohol surveillance project, and advisor for the Dublin, Ireland, Department of Health and Children. As an experienced alcohol scientist, she has published 12 peer-reviewed papers and 22 reports and book chapters.

Hope, who earned a Master of Science in physical education teaching and administration in 1985 and a Doctor of Physical Education in 1988 from Springfield College, was employed as a technical alcohol expert for the European Union in Luxembourg and as a senior researcher for the national University of Ireland, Galway. She also worked for the World Health Organization (WHO) and served in such capacities as national counterpart and an advisor, where she served on the team that drafted the 2006 WHO Framework on Alcohol Policy in the Europe region.

For more than 10 years, Hope worked as a consultant for the Department of Justice in Dublin, Ireland, as a consultant on the development of physical education in the prison system. Prior to this, she served as the founder and director of Target Health Ltd., where she provided consultancy services and developed programs in the area of health promotion for state agencies, as well as corporate and community groups.

Springfield College will present an Honorary Doctor of Humanics to Hope as part of the ceremony.  The College has historically awarded honorary degrees to a few outstanding individuals who, by their character and accomplishments, personify the Springfield College guiding philosophy, Humanics.  Humanics emphasizes educating the whole person, in spirit, mind and body for leadership in service to others.

At its 2015 commencement, Springfield College will award bachelor’s, master’s, and doctoral degrees, and certificates of advanced graduate study.