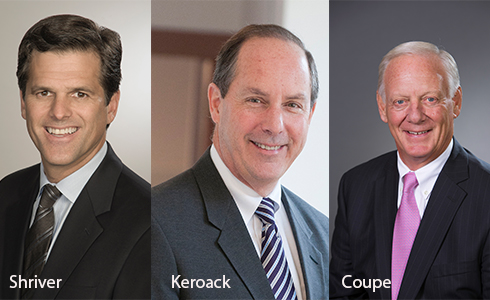 Timothy Shriver, chairman of the Special Olympics, and Mark Keroack, president and chief executive officer for Baystate Health and chair of the board directors for Health New England, will deliver the commencement addresses and receive honorary Doctor of Humanics degrees at the Springfield College 2016 Commencement ceremonies.

Shriver has served as an advocate at the national and international levels to accumulate support for issues of concern to the Special Olympics Community. He has done the same thing in the film world, co-producing Disney Studios’ The Loretta Claiborne Story, and serving as executive producer of the films The Ringer and Front of the Class. In this pursuit, Shriver also wrote a book detailing his experiences working with individuals with intellectual disabilities, and how they have inspired him, titled Fully Alive: Discovering What Matters Most.

Prior to becoming part of the Special Olympics team, Shriver co-founded, and still serves as chair for, the Collaborative for Academic, Social, and Emotional Learning, a leading research organization dedicated to the field of social and emotional learning.

Shriver has earned numerous awards for his labor, including the Medal of the City of Athens, Greece; the U.S. Surgeon General’s Medallion; the Quincy Jones Humanitarian Award; and the Children’s Hospital Health System’s Friend of Children Award. He also was recognized, in 2011, by The Huffington Post as one of the top 100 Game Changers.

As part of the undergraduate ceremony, long-time Springfield College Trustee Douglass L. Coupe will receive an honorary Doctor of Humanics degree from the College.

Coupe began his relationship with Springfield College in 1962, coming to the College to major in education and play football, where he was a member of the 1965 undefeated football team. During his time on the campus as a student-athlete, Coupe chaired the institution’s governing body, and worked on homecoming, reunion, and annual fund committees.

He graduated from Springfield College in 1966; earned a Master of Education degree in 1970; and a certificate of advanced graduate studies in 1971.

Coupe is a retired vice president of State Street Global Investor Services. He was a previous chair of the Bluffton (S.C.) Community Fund, which assists community organizations in providing human services in the town.

The graduate ceremony speaker, Keroack, has seen many facets of the medical and health care industry during his career. In his current position, he provides strategic, financial, and operation oversight for the clinical delivery system for Baystate Medical Center, the tertiary care academic medical center for western Massachusetts, four community hospitals in the area, the 942 providers in 90 practices across the region that make up Baystate Medical Practices, Baystate’s research and educational programs, VNA and hospice, and other ventures.

Keroack earned a bachelor’s degree from Amherst College, medical degree from Harvard Medical School, and a master's degree from Boston University. He was a resident in internal medicine and infectious diseases at Brigham and Women’s Hospital.

At its 2016 commencement, Springfield College will award bachelor’s, master’s, and doctoral degrees, and certificates of advanced graduate study.