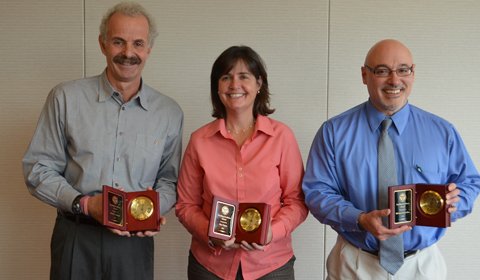 Springfield College faculty members Sue Guyer, Robert Accorsi, and Michael Accordino were presented with Excellence in Teaching Awards during a luncheon at the Richard B. Flynn Campus Union on Tuesday, Oct. 29.

The Excellence in Teaching Awards are presented annually to recognize some of the College's best teachers as they are chosen by their peers.   Recipients are nominated by current students and an awards decision committee, comprised of faculty members and students, who review the submitted materials and select winners.  Up to three awards may be given annually with each recipient being recognized with a plaque, a $250 grant, and their name added to a list of previous winners in the Richard B. Flynn Campus Union.

Guyer, who has been teaching at Springfield College since 2002, is currently an associate professor of exercise science and sport studies.  She was named the Charles J. Redmond Distinguished Alumnus Award winner in 2007 and the Graduate Associate of the Year at the College during the 2001-2002 academic year.  Guyer earned a doctor of physical education degree from Springfield College in 2003.

Accorsi began teaching at the College in 1990 and he is one of the original professors for the Department of Sport Management and Recreation.  Accorsi was named the Springfield College Distinguished Professor of Humanics for the 2009-10 academic year.  He received a master’s degree from the College in 1980.