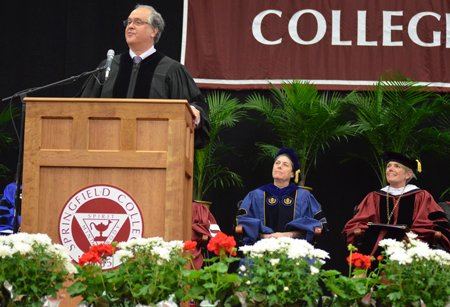 Springfield College hosted its 2014 graduate commencement ceremony on Saturday, May 17, inside Blake Arena, on the College’s main campus.  A leader in the field of medicine, Dr. G. Richard Olds, delivered the commencement address to graduating students.  Richard is the son of the eighth president of Springfield College, Glenn A. Olds.

Richard’s speech was part of the 50th anniversary celebration of Martin Luther King Jr.’s commencement speech at Springfield College in 1964.  The College has recognized this historic moment with a series of special events honoring Glenn A. Olds and King during the 2013-14 academic year.

“Dr. Mary-Beth Cooper, members of the faculty, members of the graduating class of this great institution of learning, ladies and gentlemen; I need not to pause to say how very delighted I am to be here this afternoon,” said Richard, who quoted the opening of Martin Luther King Jr.’s commencement address at Springfield College on June 14, 1964, with the substitution of Dr. Cooper for Dr. Olds.

“This coming June, it will be 50 years since Dr. King addressed the Springfield graduates, but America of the 1960s was a different place,” said Richard.  “It was an America that still had white-only lunch counters, black and white seats on the bus, and segregated bathrooms and water fountains.”

Olds went on to add, “To the Class of 2014, I would point out that the future will often place many obstacles in your way.  The road will not always be easy.  You will need to find the inner strength to overcome those obstacles and be guided by your own moral compass.  The social issues of 2014 are different than those of 1964, but they are no less daunting.  Fight for what you believe in with your whole body, mind, and spirit.  Let the spirit of Springfield College guide your future as it did my father.”

During his speech, Richard explained the many obstacles that occurred leading up to King’s commencement address at the College, including pressure from the FBI and members of the Springfield College Board of Trustees to rescind the invite to have King speak.  Backlash that went as far as to have a potential financial contributor withdraw a donation of one million dollars to the College due to King’s planned visit.  To further complicate the process, King was arrested in St. Augustine, Fla. just three days prior to his scheduled visit to Springfield College for ordering food at a white-only restaurant.  It was at this time that Glenn threatened the judge that he would broadcast King’s remarks from the local jail if King was not released, a demonstration of Glenn’s strong leadership and determination to have King deliver his commencement address to Springfield College students.

“On the desk in my office, I keep a framed black and white 5x7 photograph of the platform party from the 1964 Springfield College Commencement including Dr. King and Dr. Glenn A. Olds,” said Richard.  “Throughout my career, I have had to face many difficult and even a few impossible tasks and decisions.  I have always garnered encouragement from that photograph and the courageous events that it symbolizes.”

Dyson served at Springfield College from 2005 through 2012.  During his tenure at the College, he participated with City of Springfield leaders and the Massachusetts Department of Transitional Assistance in Project Homeless Connect to help build bridges between homeless individuals and homeless assisting agencies. Dyson’s commitment to help the homeless population included his role as co-leader of the Monday Night Run, a program designed by students who wanted to reach out to homeless individuals during the cold months of the year.

“Class of 2014, today you join something big – bigger than all of us – you become a Springfield College graduate,” said Cooper, who participated in her first graduate commencement ceremony as president of the College.  “Wherever you go, whatever career you choose to pursue, I wish the very best for each of you.  Continue to wear your Springfield College colors proudly and come back to visit whenever you are able.  Please stay in contact with us, we are always interested in your progress.”

The student speaker was Springfield College School of Health Sciences and Rehabilitation Studies student, Cora Rowland, who received a master’s of education degree.

At the graduate commencement, 600 master’s degrees, five certificates of advanced graduate study, nine doctor of philosophy degrees, and 30 doctoral of physical therapy degrees were awarded.  At the undergraduate commencement on Sunday at the MassMutual Center starting at 9:30 a.m., 944 bachelor’s degrees will be awarded for a two-day total of 1588 degrees.