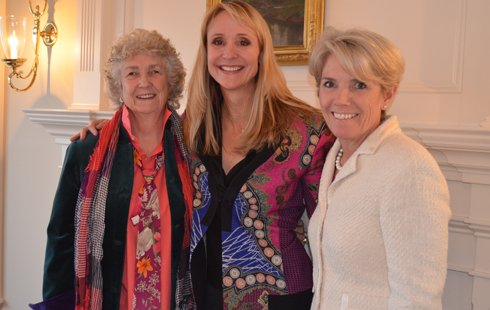 In the photo above from left to right are: Professor of Exercise Science and Sport Studies Mimi Murray, Nancy Hogshead-Makar, and Springfield College President Mary-Beth Cooper.

The Springfield College School of Health, Physical Education, and Recreation presented the 2014 Peter V. Karpovich Lecture featuring three-time Olympic gold medalist and civil rights lawyer Nancy Hogshead-Makar, on Monday, April 21, at the Cleveland E. and Phyllis B. Dodge Room in the Richard B. Flynn Campus Union.  The lecture was entitled, Title IX: We won, right? So, why the stubborn disparities in athletics?, and culminated the year-long Celebration of 50 Years of Women’s Varsity Athletics at the College.

Hogshead-Makar, who received an honorary doctorate from Springfield College in 2002, is one of the premier advocates of the Title IX Education Amendments of 1972 protecting people from discrimination based on gender in education programs or activities that receive federal financial assistance.  In 2011, she was presented the National Organization for Women’s Courage Award and was listed by Sports Illustrated as one of the most influential people in the 40-year history of Title IX.

A member of 12 separate halls of fame, including the International Women’s Sports Hall of Fame, Hogshead-Makar has testified in Congress numerous times on the topic of gender equity in athletics.  In 2009, she brought a successful legal change against the Florida High School Athletic Association whose cuts to competitive seasons discriminated against female athletes.  As part of the settlement, all competitive seasons were reinstated for all high school athletes throughout Florida.

Hogshead-Makar has also authored multiple scholarly articles regarding gender equity in athletics, including Equal Play, Title IX and Social Change, and Pregnant and Parenting Student-Athletes: Resources and Model Policies, published by the NCAA.

Prior to her professional career success, Hogshead-Makar was a world-class swimmer culminating with her winning three gold medals and one silver medal during the 1984 Olympics.  Hogshead-Makar earned the Nathan Mallison Award, given to Florida’s outstanding athlete, and she was awarded the Kiphuth Award, given to the nation’s best all-around swimmer following her success at the Olympics.

Springfield College established the Karpovich Lecture in 1973 in memory of its former faculty member, Peter V. Karpovich, who was an internationally recognized exercise physiologist and one of the principal founders of the American College of Sports Medicine.  Karpovich joined the Springfield College faculty in 1927 serving as a professor of physiology.  He was named director of health education at the College in 1947 and was appointed research professor of physiology in 1955.