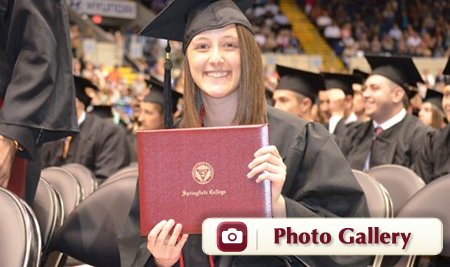 “To the Class of 2014, I would point out that the future will often place many obstacles in your way,” said Richard, who spent his childhood, from ages of 7 to 15, growing up on campus.  “The road will not always be easy.  You will need to find the inner strength to overcome those obstacles and be guided by your own moral compass.  Fight for what you believe in with your whole body, mind, and spirit.  Let the spirit of Springfield College guide your future as it did for my father.”

Richard’s speech was part of the 50th anniversary celebration of Martin Luther King Jr.’s commencement speech at Springfield College in 1964.  The College has recognized this historic moment with a series of special events honoring Glenn A. Olds and King during the 2013-14 academic year.  The senior olds withstood controversy in inviting King to speak at the 1964 commencement.

During his speech, Richard explained the many obstacles that occurred leading up to King’s commencement address at the College, including pressure from the FBI and the Springfield College Board of Trustees to rescind the invite to have King speak.  Backlash that went as far as to have a potential financial contributor withdraw a donation of one million dollars to the College due to King’s planned visit.  To further complicate the process, King was arrested in St. Augustine, Fla., just three days prior to his scheduled visit to Springfield College for ordering food at a white-only restaurant.  It was at this time that Glenn threatened the judge that he would broadcast King’s remarks from the local jail if King was not released, a demonstration of Glenn’s strong leadership and determination to have King deliver his commencement address to Springfield College students.

“I would like you, the Class of 2014 to remember with me those events of 50 years ago; a culmination of events where one man of integrity made it possible for one man with a dream to make history here at your college,” added Richard.  “As you leave this institution of learning and begin your careers, I hope you remember the words of Dr. Martin Luther King Jr. and apply them to your life’s work, ‘The time is always right to do right’.”

Springfield College presented an honorary doctor of Humanics degree to Richard, who currently is the vice chancellor and founding dean of the School of Medicine at the University of California, Riverside, the first new medical school in California in almost 50 years.  The College has, historically, awarded honorary degrees to a few outstanding individuals who, by their character and accomplishments, personify the College’s guiding philosophy, Humanics. The philosophy emphasizes the dedication of spirit, mind, and body for leadership in service to others.

“On the desk in my office, I keep a framed black and white 5x7 photograph of the platform party from the 1964 Springfield College Commencement including Dr. King and Dr. Glenn A. Olds,” said Richard.  “Throughout my career, I have had to face many difficult and even a few impossible tasks and decisions.  I have always garnered encouragement from that photograph and the courageous events that it symbolizes.”

Joining Richard on stage was Tony King, captain of the 1934 American Legion Post 21 Baseball Team, who accepted the Springfield College Humanics Achievement Award on behalf of his team.  The Springfield College Humanics Achievement Award recognizes an individual or group who has exhibited courage in the face of adversity, demonstrated leadership in service to others, advanced diversity and inclusion, served as a champion for the oppressed, furthered education in spirit, mind, and body, or contributed significantly to the understanding of the universe.

“Class of 2014, thank you for sharing your talents with us,” said Cooper, who participated in her first undergraduate commencement ceremony as president of the College.  “You will be connected with Springfield College forever – from the College’s name appearing on your resume, to the networking opportunities and friendships you’ll make because of the strong connection of our alumni base.  Most importantly, you will leave this place with an education that didn’t just take place in the classroom, and an experience that will continue to serve you – in spirit, mind, and body – for years to come.”

On Saturday, May 17, the College held its graduate commencement ceremony where 600 master’s degrees, five certificates of advanced graduate study, nine doctor of philosophy degrees, and 30 doctoral of physical therapy degrees were awarded.  At the undergraduate commencement on Sunday, 944 bachelor’s degrees were awarded for a two-day total of 1588 degrees.