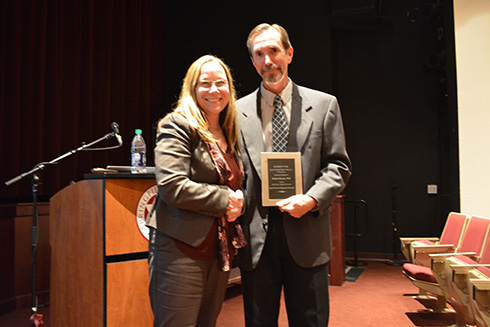 The Springfield College School of Health, Physical Education, and Recreation presented the 2016 Peter V. Karpovich Lecture featuring Robert Kersey, professor of kinesiology at California State University at Fullerton, on Tuesday, April 26, in the Fuller Arts Center. The lecture was titled, “Sport and Exercise Ergogenics: Who Cares?”

Kersey, who also serves as the director of the undergraduate athletic training education program for California State University, presented the facts and dispeled the myths related to the many performance-enhancing strategies. He discussed the evidence related to any associated medical and health issues. Performance enhancement extends beyond anabolic-androgenic steroids. In recent decades, a host of new strategies have emerged in the athletic/competitive sport arenas. The illicit techniques have permeated into the general population, with abuse by both males and females.

Prior to his current position, Kersey was an associate professor in human performance at San Jose State University. Kersey received his doctoral degree from the University of New Mexico. His dissertation topic involved the incidence of anabolic-androgenic steroids use among community college student-athletes.

Kersey earned his master’s degree at the University of Arizona and his bachelor’s degree at Oregon State University. Presently, he serves on the Board of Directors for the National Athletic Trainers’ Association – Research and Education Foundation. Kersey also serves on the Editorial Board for the Journal of Athletic Enhancement and is a reviewer for the Journal of Athletic Training. He served as the lead author on the NATA Position Statement on Anabolic-Androgenic Steroids.

Springfield College established the Karpovich Lecture in 1973 in memory of its former faculty member, Peter V. Karpovich, who was an internationally recognized exercise physiologist and one of the principal founders of the American College of Sports Medicine. Karpovich joined the Springfield College faculty in 1927 serving as a professor of physiology. He was named director of health education at the College in 1947 and was appointed research professor of physiology in 1955.