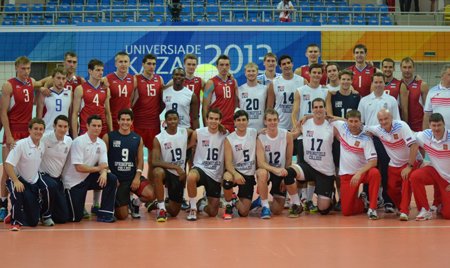 The Springfield College men's volleyball team wrapped up representing Team USA at the World University Games with a four-set win over Macau on Sunday afternoon. In their final match, Team USA won by the set scores of 26-24 25-21 17-25 25-20.

"I couldn't have asked for a better exclamation point on this incredible experience," said head coach Charlie Sullivan. "Not only did this trip give us the rare opportunity to grow as a team and as volleyball players, but as people as well."

As a result of their victory over Macau, Team USA finished the competition in 19th place. In addition to playing Macau this week, Springfield also went up against Estonia, Belarus, Russia, Hong Kong, Korea, and China, while also scrimmaging Australia and Chile.

For the first time all tournament, it was the American squad that jumped out to a fast start to begin the match, as a block from Vega allowed Team USA to take an 11-6 lead.

Macau stormed back with a 12-5 surge to regain an 18-16 lead, only to have Springfield rally to take a 21-20 lead. Macau would eventually tie things at 24 for the last time before Pelletier's kill found the court and Vega notched along block for the 26-24 win.

In the second set, consecutive kills from Vega provided Team USA with a comfortable 16-12 cushion. Macau got as close as two on four different occasions, the last coming at 23-21, before a Macau service error and Vega kill ended the frame.

It was all Macau in the third set, as Team USA suffered from too many mistakes on the offensive side of the ball to gather any momentum. Macau led by as many as 10 in the set and would take the stanza by a 25-17 count.

The fourth set was tied 12 times in the early going before a 4-0 burst, highlighted by two thunderous swings by Woods, gave the Americans a 17-13 advantage. Macau would not go away quietly, putting together a 5-2 run to get within 19-18.

However, Team USA would not be denied on this afternoon as Falcone took over the match down the stretch. The four-time All-America selection sandwiched a kill and block around a Pieper ace, and with match point on the line, Pieper found Falcone in the middle for a fitting end to the trip as he bounced the game-winner in front of the Macau defense.