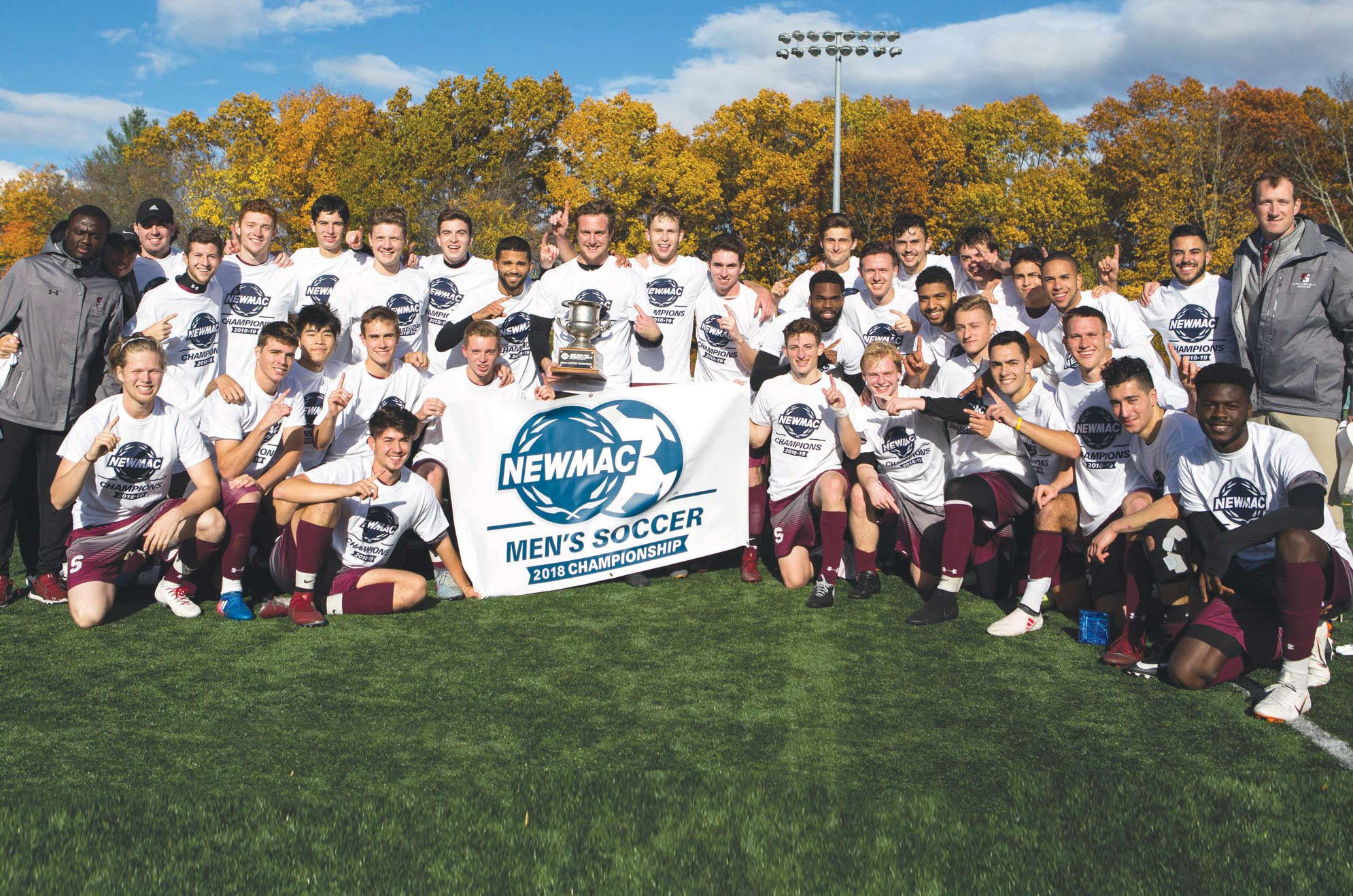 For the third-consecutive season, the Springfield College men’s soccer team earned a spot in the NCAA Division III Championship Tournament after in prevailed over Babson, 1-0, in the New England Women’s and Men’s Athletic Conference (NEWMAC) Championship in November. Christian Schneider (Douglas, Mass.) scored the game-winning goal in the 88th minute en route to earning the NEWMAC Championship Most Outstanding Player for the second time in his career. Under first-year head coach Tommy Crabill, the Pride advanced to the national tournament where they faced off against Ramapo in the opening round.

Springfield College Athletics finished 22nd nationally in the final overall standings of the 2017-2018 Division III Learfield Directors’ Cup. Springfield’s finish marked the third time in the last seven seasons that the Pride finished in the top 25 and in the top 5 percent of the 450 Division III athletic programs in the country.

It was another successful year for Springfield College Athletics, which was highlighted by some remarkable performances on the national stage. The men’s volleyball team captured its fifth NCAA Division III National Championship in the past seven years, while the men’s basketball team made a historic run to the NCAA Division III Championship Final Four. The Springfield ranking was based on points received for six teams that advanced to the NCAA Championships, including the football, men’s soccer, men’s basketball, men’s volleyball, men’s lacrosse, and women’s lacrosse teams, and individuals from the women’s swimming and diving, men’s swimming and diving, men’s track and field, and women’s track and field scored points for the Pride at their respective NCAA Championships.

Brock stepped into the role of president a little early as the veteran coach, who just completed his 20th season at Springfield, presided over NABC board of directors meetings and events while Self was busy coaching his Jayhawks in the Final Four.

A long-time member of the NABC board as a representative of NCAA Division III, Brock was the recipient of the NABC Guardians of the Game Award for advocacy in 2016 for his commitment to college basketball and the coaching profession. The former chair of the NCAA Division III Men’s Basketball Committee, Brock is playing an instrumental role during this important time in college basketball after the September 2017 announcement of a federal investigation into fraud in college basketball recruiting that made it clear the NCAA needed to make significant changes and brought on the creation of the Commission on College Basketball.

Back on the National Stage

For the ninth time in the past 10 seasons, the Springfield College women’s volleyball team secured a spot in the NCAA Division III Championship Tournament after it earned one of 19 at-large bids from across the country to compete in the 64-team field. Under the direction of Moira Long, G’97, who was named NEWMAC Coach of the Year for the third time in her eight seasons on the sidelines, Springfield posted a 23-7 regular-season record and advanced to the second round in the national tournament for the seventh time in the last nine years.

Nick Giorgio (Cumberland, R.I.) was one of 13 student-athletes from across the nation to be named a semifinalist for the 2018 Gagliardi Trophy, an award presented by Jostens and the J-Club of Saint John’s University (Minn.) to the most outstanding football player in NCAA Division III. The Gagliardi Trophy, given annually since 1993, recognizes excellence in athletics, academics, and community service. This marks the second-consecutive season that Springfield College has had a national semifinalist for this prestigious award as last year, Jordan Wilcox finished as a national finalist following a historic year as the Pride’s star fullback. In fact, Springfield College was one of only three football programs in the country to have a semifinalist in each of the last two seasons, and only one to have both an offensive and defensive student-athlete recognized. Giorgio was the only student-athlete from New England to be a 2018 Gagliardi Trophy semifinalist.

For the first time in Division III program history, three Springfield College student-athletes who compete during the fall were recognized as the NEWMAC Rookie of the Year. Women’s soccer’s Kaleigh Dale (Mansfield, Conn.), field hockey’s Kyra Ashe (Longmeadow, Mass.), and women’s volleyball’s Sara Labadorf (Huntersville, N.C.) were honored for their outstanding play. Dale broke the program’s goals-in-a-single-season record. Ashe was the second-leading scoring first-year in Division III field hockey, and Labadorf guided her team back to the NCAA Championship Tournament.