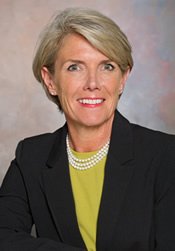 “Upon first meeting Dr. Cooper I was quickly impressed with her enthusiasm and her ability to effectively communicate,” said Coupe. “She is a visionary, with a strong background in higher education and a commitment to community engagement as evidenced by her volunteer leadership with the YMCA, one of the College’s longstanding partners. Most importantly, she cares deeply about students, has rich experience in overseeing all aspects of student life, and understands the importance of strong academic programs coupled with extensive co-curricular opportunities.”

Cooper currently serves as senior vice president for student affairs at Rochester Institute of Technology (RIT) in Rochester, NY.  She provides leadership for a broad-based campus life program, including intercollegiate athletics, and has extensive experience in fund-raising. Cooper also serves as distinguished lecturer in the College of Business at RIT and as an adjunct professor in the Warner School of Education at the University of Rochester.

"I am thrilled to join the Springfield College community,” said Cooper. “The College has such a meaningful mission and renowned reputation and I am honored to have been selected to serve as its next president.”

Cooper joined RIT in 2001, after having been dean of students at the University of Rochester since 1997.  Prior to that, Cooper was vice president for student affairs at St. John Fisher College in Rochester, N.Y.

An active member of the Rochester community, Cooper was named one of Rochester’s most influential women by the Rochester Business Journal in 2005. This honor recognizes the achievements of women who work in the highest ranks of Rochester organizations, and make or influence policy decisions. She currently serves as the chair of the board for the YMCA of Greater Rochester.

Cooper arrives after a decade of significant growth at Springfield College. The College has experienced unprecedented transformation of programs and facilities, including: expanded enrollment; new doctoral programs; tremendous growth of student life activities; the most successful fundraising campaign in the college’s history; implementation of an extensive new construction and renovation agenda; significantly improved financial standing; a revitalized relationship with its long-standing legacy partners; and enhanced community relations.

In February, Richard B. Flynn announced his retirement from the presidency following a highly successful 14-year tenure. A national search was conducted, resulting in the appointment of Cooper.

Joining Cooper in Springfield will be her husband, David Cooper. They have a son, Calvin, who is a junior at the University of Delaware.