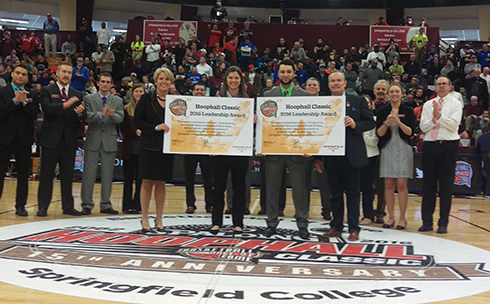 Both Fairman and Weigert were key contributors during the 2016 Spalding Hoophall Classic, the leading high school basketball tournament in the country showcasing the nation’s top recruits. As part of their responsibilities, Fairman and Weigert helped lead more than 75 student event staff workers and more than 30 student liaisons during the event. They created and conducted training sessions for volunteers of the event; collaborated with Springfield College Office of Conferences & Special Events, the Naismith Memorial Basketball Hall of Fame, and ESPN to ensure schedules of events; and supervised all event operations during the five-day tournament.

Weigert is a native of Windsor Locks, Conn., and has participated in the Hoophall Classic for three consecutive years working as a supervisor, team liaison, and member of the event management and operations staff. Currently a dean’s list student, he has served as a Springfield College student ambassador for both the Team IMPACT organization and St. Baldrick’s Foundation. Weigert remains active in his hometown volunteering as an assistant varsity baseball coach for Windsor Locks High School and as a youth basketball supervisor for the Windsor Locks Parks and Recreation Department.

The Hoophall Classic Leadership Award is presented annually to both a male and female junior majoring in sport management who has maintained a successful grade point average and demonstrated a combination of service to Springfield College and the Hoophall Classic. The recipients are each awarded a $2,500 scholarship to be used during their senior year at Springfield College.