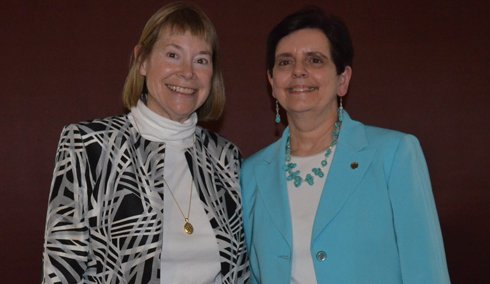 The Springfield College Department of Biology and Chemistry presented the 17th annual Britton C. and Lucile McCabe Lecture featuring Jimmie Oxley on Wednesday, April 2, in the Cleveland E. and Phyllis B. Dodge Room in the Richard B. Flynn Campus Union. Oxley’s presentation entitled, “The Explosive Threat,” examined improvised homemade explosives and how research contributes to preventing the production of these devices.

Oxley is a chemistry professor and co-director of the Center of Excellence in Explosive Detection, Mitigation, and Response at the University of Rhode Island.  Her expertise is in the chemistry of thermal decomposition of explosives and highly energetic materials.

Oxley created a database that is used by scientists, law enforcement, and military personnel from around the world to assist them in combating explosives-based terrorism. During her professional career, she has worked closely with bomb squads following the 2005 London bombings; she collaborated with the FBI on simulations of the 1993 World Trade Center bombing; and has worked with British officials to examine larger fertilizer bombs.  Oxley also has worked with the United Kingdom and Israel on research projects related to explosives and terrorism.

The Britton C. and Lucile McCabe Lecture has been in existence at Springfield College since 1997 and honors longtime professor of biology at the College, Britton C. McCabe, and his spouse, Lucille McCabe.  The lecture series brings noted professionals in the health, biological, and physical sciences to Springfield College to discuss timely topics and discoveries.