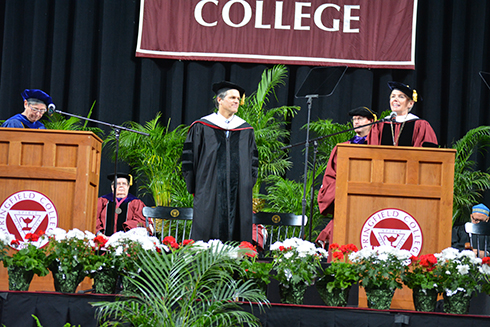 Springfield College hosted its 130th undergraduate commencement ceremony on Sunday, May 15, at the MassMutual Center in Springfield. Timothy Shriver, chairman of the Special Olympics, delivered the commencement address to graduating students.

Shriver has served as an advocate at the national and international levels to accumulate support for issues of concern to the Special Olympics Community. He has done the same thing in the film world, co-producing Disney Studios’ The Loretta Claiborne Story, and serving as executive producer of the films The Ringer and Front of the Class. In this pursuit, Shriver also wrote a book detailing his experiences working with individuals with intellectual disabilities, and how they have inspired him, titled Fully Alive: Discovering What Matters Most.

Prior to becoming part of the Special Olympics team, Shriver co-founded, and still serves as chair for, the Collaborative for Academic, Social, and Emotional Learning, a leading research organization dedicated to the field of social and emotional learning.

“Graduates, the curriculum now shifts, it is unity or division,” added Shriver. “The subject is not what you need to know, but why you are here. Don’t wait to take the course of why you are here. You will not pass it with the obvious answers. Your purpose isn’t money or toys, or beauty or power. They all help, but they will not answer your why. That’s the big question, why are you here. For unity or division?”

Shriver has earned numerous awards for his labor, including the Medal of the City of Athens, Greece; the U.S. Surgeon General’s Medallion; the Quincy Jones Humanitarian Award; and the Children’s Hospital Health System’s Friend of Children Award. He also was recognized, in 2011, by The Huffington Post as one of the top 100 Game Changers.

“The syllabus is now your life,” said Shriver. “Every sunrise is a quiz. Every person you meet is a new reading. Please try not to judge that reading by the cover. Every moment of sadness is the opportunity to go back and talk to the professor. I ask you again, as you take this course, choose unity. When in doubt, think back to the Special Olympics athlete. Remember the message, winning is not about who you beat in that race, but how you run and who you take with you.”

Retired president and CEO of the YMCA of Greater Houston Clark Baker received the 2016 Springfield College Humanics Achievement Award as part of the undergraduate Commencement ceremony. Clark has led Houston’s YMCAs through tremendous growth, increasing the budget from $67 to $118 million and expanding the Y’s capacity from 28 centers to 37. That evolution led to the YMCA of Greater Houston serving 650,000 people annually to now reaching more than 1,000,000 people per year. Baker’s dedication to the YMCA has strengthened communities, brought people together, and spread good throughout the YMCA movement and beyond.

The Springfield College Humanics Achievement Award recognizes an individual or group who has exhibited courage in the face of adversity, demonstrated leadership in service to others, advanced diversity and inclusion, served as a champion for the oppressed, furthered education in spirit, mind, and body, or contributed significantly to the understanding of the universe.

“To the Class of 2016, I say congratulations and thank you,” said Cooper. “You have made us proud in more ways than we can count. Please remember to stay connected to us and to each other. Through the Springfield College network, great things can be accomplished. All the best as you continue your journeys.”

Springfield College School of Professional and Continuing Studies student, Jacqueline Ortiz Miller, was the student speaker at the undergraduate ceremony.

On Saturday, May 14, the College held its graduate commencement ceremony where 646 master’s degrees, eight certificates of advanced graduate study, seven doctor of philosophy degrees, 38 doctoral of physical therapy degrees, and five doctor of psychology degrees were awarded. At the undergraduate commencement on Sunday, 915 bachelor’s degrees were awarded for a two-day total of 1619 degrees.