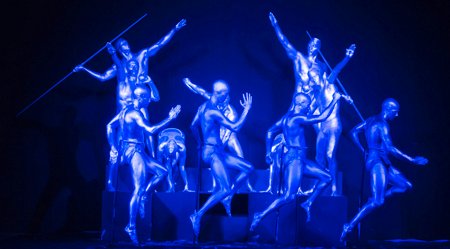 Close to 100 participants took part in the show including All-American and champion gymnasts from the men’s and women’s gymnastics teams and student dancers.  Individuals will perform a full range of gymnastic feats and dramatic special events to music from recent decades.

Along with the many gymnastic and dance numbers, the dramatic finale of the show continuesd to honor Springfield College tradition with the tableaux - living statuaries by gymnasts in metallic body paint.  The theme of this year’s tableaux was a salute to milestones at Springfield College including: the second consecutive NCAA Division III Men's Volleyball National Championship, Devin Biscaha capturing the 2013 NCAA Division III Wrestling National Championship at the 157 pound weight class, and the celebration of 50 years of women’s athletics at Springfield College.

The event’s master of ceremonies was retired Massachusetts State Police sergeant Daniel Clark.  Better known as the “Singing Trooper,” Clark has previously performed with the Boston Pops, the Boston Celtics, the Boston Bruins, and also performed at the Boston Marathon.