SPRINGFIELD, Mass. -- Springfield College President Richard B. Flynn announced today that he will retire on August 31, 2013. Flynn, who transformed the college over his 14-year tenure as president, shared his plans to retire with the college’s Board of Trustees this past weekend. 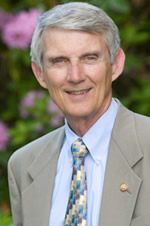 Flynn began his work as the college’s 12th president in March 1999. Since that time, the college has experienced unprecedented transformation of programs and facilities, including: expanded enrollment; new doctoral programs; tremendous growth of student life activities; the most successful fundraising campaign in the college’s history; implementation of an extensive new construction and renovation agenda; significantly improved financial standing; a revitalized relationship with its long-standing partner, the YMCA; and enhanced community relations.

“My time at Springfield College has truly been a labor of love and the highlight of my professional career,” said Flynn. “I am deeply grateful to all of those who have shared this incredible journey with me. Together we have stayed true to the college’s long-standing mission of educating students in spirit, mind, and body for leadership in service to others.

“I will be forever appreciative of the opportunity to serve this remarkable college and community. When I look back at my time here, I will remember the caring and dedicated faculty and staff, the talented and committed leadership team, the Board of Trustees that is both genuinely and generously supportive of the college’s mission, the alumni who make such a difference, our city and community leaders with whom we have collaborated, and our amazing students who, year after year, always seem to bring a smile to my face, and who make our collective efforts worthwhile. Springfield College graduates continue to make a difference in their chosen careers and in their communities.”

Flynn had originally planned to retire in 2011. He stayed on to address several key projects underway at the time. “As it turned out, the subsequent 2011 tornado and October snow storm both caused significant damage to the campus and we were thankful that Dick Flynn was at the helm,” said Board Chair Douglass Coupe. “The Board of Trustees has been most appreciative of Dick’s vision and leadership through these challenging times. His presence will be sorely missed. We are pleased that Dick has agreed to work with us to assure a smooth transition.”

Early in his time at Springfield College, Flynn made the statement that has served as a call to action – that the college should be ‘a part of, and not apart from’ its neighborhood and its community. The students, faculty, and staff stepped up to the plate and have been creative and energetic in working collaboratively with the community, measured in part by the tens of thousands of volunteer hours in service to the neighborhood and greater Springfield area. Appreciation has been expressed from many quarters ranging from local neighbors to the mayor of the city. “President Flynn has been not only a great college president, but an important and respected leader in the City,” said Domenic Sarno, Mayor of the City of Springfield. “He understands both economic development and the value of service and volunteerism. The City of Springfield is a better place because of Dick Flynn.”

Coupe says a search firm will be identified soon and a committee representative of the college’s constituencies will be named by the Board to assist with the search. It is anticipated a new president will take office at the beginning of the 2013 fall semester.

“As someone who has been associated with Springfield College for more than 50 years, from student to Board Chairman, I can truly say that Dr. Flynn’s accomplishments during his 14-year presidency have been remarkable,” said James E. Walsh, member of the Springfield College Board of Trustees. “One of his early accomplishments was the development and implementation of a comprehensive strategic plan for the college. The 10-point plan served as a roadmap for improvements and expansions in a wide range of areas and was instrumental to the progress achieved. Dick also provided the leadership for campus master planning efforts outlining the footprint, facilities, and grounds for the physical campus.”

Flynn’s devotion to student growth and development has been paramount throughout his term as president, as evidenced by the Board of Trustees’ unanimous decision to name the new campus union for him. The Richard B. Flynn Campus Union opened in 2010 and serves as the hub for student activities and services. Flynn also led the college’s development of a comprehensive recreation program and secured the funding for a state-of-the-art Wellness Center.

Academics were significantly enhanced under Flynn’s leadership through new program development including a new MBA, new Physical Therapy doctorate, new Counseling Psychology doctorate, new Nutritional Sciences Program, and the establishment of the Center for Wellness Education and Research. The School of Human Services expanded its regional campuses across the country and the School of Health Sciences and Rehabilitation Studies was organized to provide enhanced focus on health service occupations.

Flynn’s leadership in enhancing the college’s financial standing has been noteworthy. A major economic driver in the Springfield area, the College’s economic impact has multiplied exponentially over the years of Flynn’s presidency. “Dr. Flynn is one of the best college presidents in the nation,” said Harold Smith, Springfield College trustee and Chair of the Investment Committee, and past CEO of the YMCA Retirement Fund. “We are blessed that he understands planning, financial management, fundraising, academics, athletics, the needs of the faculty and students, and all the other aspects of higher education. And, it’s important to note, Dr. Flynn has significantly strengthened the historic partnership between the YMCA and the college.”

Enrollment growth has been a significant factor in the college’s financial stability. The number of students has grown by nearly 25 percent since Flynn’s arrival. Springfield College’s enrollment in traditional undergraduate and graduate programs on the main campus in Springfield is nearly 3300, and enrollment at the regional campuses is approximately 1850, for a total of approximately 5150. An increased focus on enrollment management and enhanced marketing have both contributed to this growth.

An astute fundraiser, Flynn was instrumental in conducting the college’s recent successful campaign. Sally Griggs, chair of the college’s Board of Trustees at the time said, “President Flynn provided the leadership to bring in five times more than had ever been raised in any single campaign previously at the college.” Leadership for the 21st Century: The Campaign for Springfield College raised $44.5 million, exceeding the original goal by 11 percent and resulting in new construction that included the Campus Union, the Wellness Center, and the Field House; and extensive renovations of the Schoo-Bemis Science Center and to the oldest building on campus, Judd Gymnasia.

The one area most exemplifying the campus transformation led by Flynn is that of campus facilities and grounds. Six new facilities and a major sports complex were designed and built, and 13 existing facilities and additional athletic/recreational spaces were totally renovated and upgraded – a total of more than 900,000 square feet of space, at an investment exceeding $120 million over the 14-year span. Many of the new facilities and renovations have won national awards for design excellence.

“The outcomes of Dick Flynn’s service as president of Springfield College are too many to enumerate,” said Coupe. “Those of us fortunate enough to have worked with him for the past 14 years, have been witness to his remarkable impact as an educational leader, facilities planner, faculty and staff advocate, and student-centered mentor to many. Dick’s leadership has been demonstrated on many fronts throughout the years and clearly is a tribute to his vision and work ethic. His legacy is lasting and will endure for generations of students to come. His contributions allow the college’s mission to live on through students, faculty, staff, and alumni around the globe.”