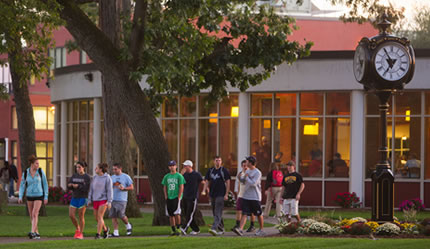 More than 58 percent of Springfield College graduates have pursued an advanced degree within one year of completing their undergraduate degree, 31 points higher than the national average of 27 percent. Springfield College is the only Massachusetts college or university listed in the top 10 of the U.S.News & World Report study.

“Springfield College is committed to providing a quality education that contributes to the success of our graduates,” said Jean Wyld, Vice President for Academic Affairs. “We are pleased that our students have been successful in entering graduate and professional programs.”

Students with a master's degree have an average annual salary of $62,000 and an unemployment rate of only 3 percent, compared with $48,000 and 5 percent for those with a bachelor's degree, according to a 2012 report by the Center on Education and the Workforce at Georgetown University.

Springfield College ranked in the top tier in its category in U.S.News & World Report's 2013 edition of "Best Colleges” released in September. Springfield College appeared in the category of Best Regional Universities – North Region. The ratings were based on such variables as peer assessment, graduation and retention rates, student selectivity, class size, alumni giving, and student-faculty ratio.