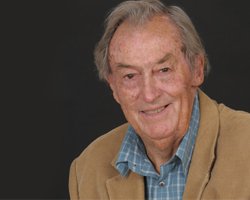 Springfield College hosted paleoanthropologist, political advisor, and environmentalist Richard Leakey on Thursday, Oct. 16, in the Cleveland E. and Phyllis B. Dodge Room.  Leakey’s lecture titled, “An Evening with Richard Leakey: Exploring a Life of Discovery and Activism,” was part of the Springfield College Arts and Humanities Speaker Series.  The series has been made possible through the generosity of Carlton ’63 and Lucille Sedgeley.

Son of Louis B. and Mary Leakey, Richard Leakey, with his wife Meave and daughter Louise, has worked toward a greater understanding of the origins and making of mankind.  They have been credited with some of the most significant fossil discoveries in history.  The Leakey family has unearthed Proconsul africanus, Australopithecus boisei, Homo habilis, and the footprints of Australopithecus afarenis, known as the skeleton “Lucy.”  Leakey’s own team discovered the most intact early human skeleton ever found nicknamed “Turkana Boy” and referred to as either Homo erectus or Homo ergaster in 1984.

While director of the Natural Museum of Kenya, Leakey was an outspoken critic of the killing of elephants for their ivory.  The then-president, Daniel Moi, turned the tables on Leakey and appointed him director of Kenya Wildlife Services to solve the problem.  He accepted the challenge, stopping much of the poaching.  However, in 2001, he left the government in order to form his own political party to fight government corruption.

An author of more than 100 articles and books, it was Leakey’s published work in 1995, titled The Sixth Extinction,that examined the five great catastrophic extinctions in the history of the planet and stressed how human beings are dangerously reducing biodiversity, damaging ecosystems, and possibly precipitating the next major extinction.

Founded in 1885, Springfield College is known worldwide for the guiding principles of its Humanics philosophy—educating students in spirit, mind and body for leadership in service to others. With its foundation of academic excellence and rich athletic heritage, Springfield College prepares students with real-world leadership skills for careers that transform lives and communities. The college offers a range of undergraduate and graduate degree programs in the fields of health sciences, human and social services, sport management and movement studies, education, business, and the arts and sciences. It also offers doctoral programs in physical education, physical therapy, and counseling psychology. The college is ranked in the 2014 edition of “Best Colleges” in the top tier of “Best Regional Universities – North Region” by U.S.News Media Group, and is designated as a premier Leadership Development Center by the YMCA of the USA. More than 5,000 traditional, nontraditional and international students study at its main campus in Springfield, Mass., and at its School of Human Services campuses across the country.