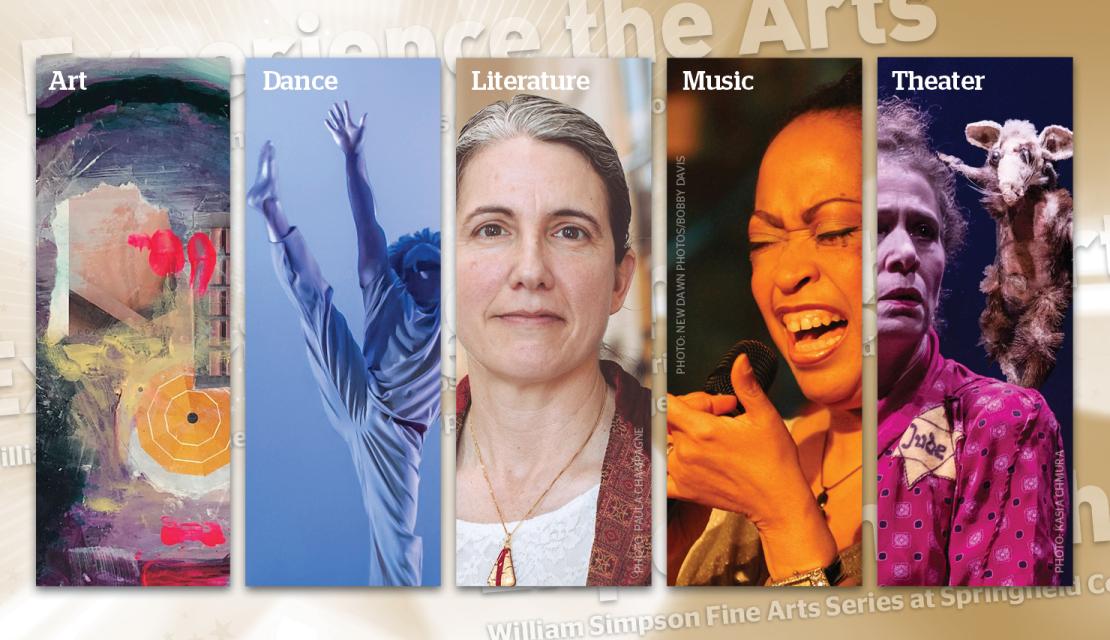 Welcome to the spring 2022 season of the William Simpson Fine Arts Series at Springfield College.

The new season of the William Simpson Fine Arts Series at Springfield College will entertain and inspire.

Experience the arts with magnificent work from artists and performers from both inside and outside the Springfield College community. Attendees will be dazzled by dance performances, captivated by art exhibitions, and delighted by concerts and literary events.

Programs are open to the public, and most events are free of charge unless otherwise noted.

An Art of Participation: Photographs of Garry Winogrand

We are thrilled that the photographs of renowned street photographer Garry Winogrand will be on exhibit in the William Blizard Gallery. On exhibit will be his 1982 portfolio: Women are better than men. Not only have they survived, they do prevail.  An epic chronicler of American life, Winogrand said, “You may say I'm a student of photography, and I am– but really, I’m a student of America.”  Known for his wry observations of fleeting human interactions, his photographs offer unexpected details and unresolved moments in time, encouraging us to look and look again at these snapshots of everyday life. This portfolio offers characteristic Winogrand points of view: tilted horizons, temporary choreographies, and centrifugal compositions. The images offer a unique vantage point on post-World War II America: an energetic tension between hope and optimism for a new age, woven through with deep ambivalence and anxiety.

The students of ARTS 225: Introduction to Photography, will be creating work in response to the photographs, which will be included in the exhibition as well.

The Last Rat of Theresienstadt

Sofia Brünn, a Weimar cabaret star from 1930’s Berlin, finds herself transplanted to Theresienstadt, a concentration camp in Czechoslovakia. During her time in the camp, she forges an unlikely friendship with Pavel, a rat. Despite the lack of food that has driven away the rest of his kind, Pavel remains with her out of his love for her and her art.

This award-winning show from New York is about resistance and hope, and the need to fill the soul as well as the body. A dark comedy, The Last Rat of Theresienstadt is a low-tech, multi-media play with music, puppetry, and live-action projections. ​

Note: This show is for mature audiences only.

This fresh adaptation of a classic Greek drama tells the story of a rebellious young woman, Antigone, who resists a tyrannical political leader, the new king Creon, who happens to be her uncle! Our new version features the modern-day setting of a war-torn country, and the constant media, cameras, and reporters who press themselves into the middle of this family tragedy. A masterpiece of civil disobedience, Antigone explores the struggle of the individual with the laws of the state.

Do the proud ever find joy? Whose truth matters?

U.S. Army veteran and poet Karen Skolfield will read from her poetry, including her most recent book, Battle Dress (W. W. Norton), which draws on her experiences serving in the military. Described as “a terrific and sometimes terrifying collection–morally complex, rhythmic, tough-minded, and original” by poet Rosanna Warren, Battle Dress won the 2020 Massachusetts Book Award in poetry and the Barnard Women Poets Prize. Skolfield’s first collection, Frost in the Low Areas (Zone 3 Press), won the 2014 PEN New England Award in poetry. She also is the winner of the 2016 Jeffrey E. Smith Editors’ Prize in poetry from The Missouri Review. Skolfield teaches writing to engineers at the University of Massachusetts and serves as the poet laureate for Northampton, Mass., for 2019-2022.

Not to be missed! A Q&A will follow the reading.

Samirah Evans and her Jazz Quintet

During her career as a performer and recording artist, Samirah Evans has become known for her dynamic and soulful approach to music, especially in the jazz and blues genres. Her musical style is heavily influenced by the New Orleans sound where she was one of the city’s most popular and in-demand singers for nearly 20 years. Her 1990 debut at the New Orleans Jazz and Heritage Festival began a run of 15 consecutive appearances, either as a leader or featured vocalist, and she was a fixture in clubs and concert venues throughout the Crescent City, including Snug Harbor, Tipitina’s, and the House of Blues.

This showcase of new choreographic works by Cynthia Duran and Elaine Ortiz aims to bring awareness and acknowledge different social issues, displaying different intersectionalities with underlying themes of power. This concert consists of a series of dance works showcasing topics surrounding ableism, sexual violence, the dynamics of power in prison systems, trauma, suicidal ideation, and gender through the lens of marginalized groups, investigating the complexities of these issues in our society and bringing them forth to spark dialogue. The human experience is complex and ranges in how we express ourselves and how we don’t. This show encompasses the grief, joy, violence, perseverance, and fragility of our relationships with ourselves, others, and the system that we currently live in.

The annual Spring Music Concert will feature the music of the SC Singers, the Springfield College Band, along with showcase performances from select students involved in music studios across campus. Stay tuned for more information!

The spring dance concert will feature new dance works by student choreographers in a wide variety of styles from contemporary to tap. Don’t miss this exciting event.

If you have a disability and require a reasonable accommodation to attend any of the William Simpson Fine Arts Series events, please contact Kellie Murphy at least two weeks in advance of the event date, at kmurphy17@springfield.edu or (413) 748-3930 to discuss your accessibility needs.

COVID Guidelines: Springfield College is following COVID guidelines shared by the Massachusetts Commissioner of Public Health and the Centers for Disease Control and Prevention. Please visit springfield.edu/covid for the latest updates.