Cogs in the Wheel

The undefeated 1968 men’s soccer team was a unique collection of talent and personalities with a willingness to put the team first. 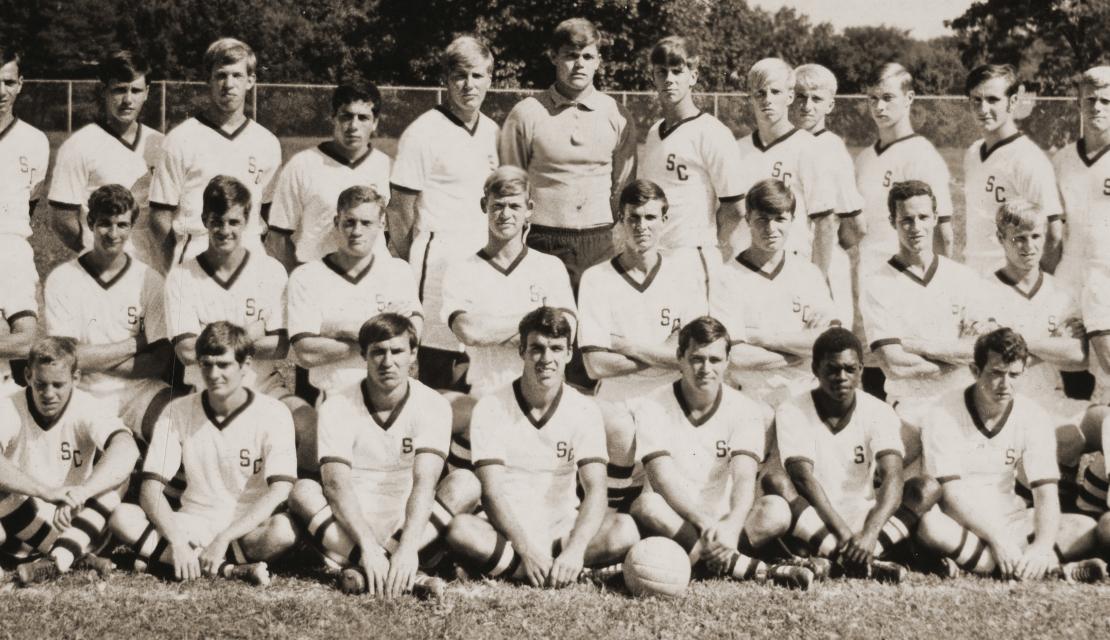 The 1968 Springfield College men’s soccer team, led by Head Coach Irv Schmid, finished the season with a record of 13-0-3 and won the NCAA Atlantic Coast Championship. While there was some optimism heading into the season, no one was expecting to go undefeated.

“Our sophomore year we were really bad, a 4-7-1 record. But after our junior year, we finished 8-4-1 and it was like ‘Hey, we’ve got something going here,’” said Page Cotton ’69, co-captain and starting defender.

“I don’t know that anyone looked further down the road than to the next game,” said Bill Muse ’69, co-captain and midfielder. “I think it’s because we had dreams, but we didn’t have any expectations.”

The team’s magical season began with a jamboree in East Stroudsburg, Penn. They didn’t lose a game.

“That bus ride back we were thinking, ‘Wow, we competed with some of the top schools and held our own.’ That was the start of it,” said Cotton.

The uniqueness of this team began with its formation, which featured four defenders, two halfbacks, and four forwards. The relatively new “4-2-4 design” was based upon the formation the Brazilian men’s soccer team, which featured Pele, used in the 1958 World Cup.

“To play with that kind of formation you had to have two really good midfielders, and we had that in Bill Muse and Jim Quigley,” said Cotton of the two All-Americans.

“Our back four was known as the ‘Four Blocks of Granite.’ We had a ton of speed up and down the flanks and then we had two assassins up front, Paul LeSeuer and Willie Kaman, who only needed half a chance to punish you,” said Alden Shattuck ’70, who played defense.

The team also had a lot of talent on the bench, ready to step up at a moment’s notice. Finally, there was Tony DiCicco ’70 in goal. DiCicco, an All-American goalkeeper and captain of the team his senior year, went on to coach the U.S. women’s soccer team to a gold medal in the 1996 Olympics. DiCicco, who passed away in 2017, was inducted into the Springfield College Athletic Hall of Fame in 1995.

“Tony gave you confidence. When he’s in goal you know you’ve got a chance because they’re not scoring,” said Shattuck. “We only let in an average of 0.5 goals per game that year.”

“Besides being just a great player, Tony was a really great leader and a great person; someone you wanted to hang out with off the field,” said Cotton.

Part of what made the team so successful was how all the personalities meshed.

“We were a group of very cohesive people who came together,” said Muse. “You don’t know why you win but you do. You’re winning games that you shouldn’t and if somebody went down with an injury, there was always somebody there to pick it up.”

The personalities of the players came alive during the team’s bus rides. Each ride started with Chuck’s Cozy Corner, in which Charlie Zien ’69 would mimic a Johnny Carson monologue, call up, as his guests, a series of teammates who had a notable day on the field, and rip them to pieces.

Munsy’s Magical Musical Hour came next, in which Jeff Munsell ’69 would sing Mack the Knife and then invite a teammate to lead the team in a song of his choosing. As the bus rolled up to the Field House, the team manager, Sandy Peterson, would lead the team in a singing of Down by the Old Mill Stream.

“It sounds simple, but it was something we really missed the next year. You can replace the players on the field but not those personalities,” said Shattuck.

The bus rides, team dinners at Schmid’s house, and laughter in the locker room all helped bring together a collection of athletes who understood that no one was bigger than the team.

“If anyone came to that group with an ego, he would not have lasted long,” said Muse. “We were all just cogs in the wheel.”