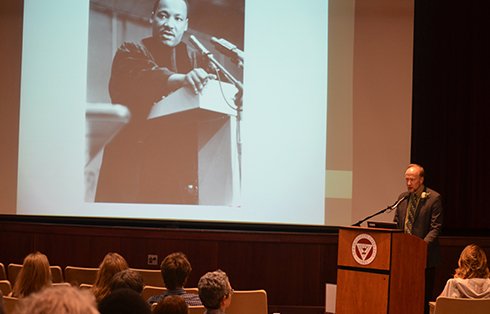 As Distinguished Springfield Professor of Humanics, Dobrow has sought to apply the civil rights focus to the Springfield College campus. His projects have included expanding the College’s involvement with the Team IMPACT program; deepening the connections with the School of Human Services; launching the Slice of Life Student Diversity Forum; creating the Tom Waddell Day; and pushing for an art installation, both to claim the College’s impressive history with social justice, and to challenge us to live up to the lofty spirit of our mission statement.

Dobrow came to Springfield College in the fall of 1999 with the launching of the Communications/Sports Journalism major. Teaching and learning from the consistently good-hearted students at Springfield College over the past 16 years has been one of the great joys of his life.

Dobrow’s work as a national-award-winning journalist focused primarily on sports for many years. During his time at Springfield College, he increasingly used sports journalism as a vehicle to address issues of injustice. For publications such as The Boston Globe and ESPNBoston.com, he penned in-depth feature stories that focused on the proverbial playing field not being level because of racism, sexism, homophobia, and discrimination against people with disabilities.

Digging in to the remarkable story of the commencement speech delivered by Martin Luther King Jr. at Springfield College in 1964, Dobrow turned his focus to the civil rights movement. Last April, he presented his research at the Civil Rights Summit at the LBJ Presidential Library in Austin, Texas.

That conference, which included keynote presentations by President Obama, and former Presidents Carter, Clinton, and George W. Bush, was transformative for Dobrow. He conducted a one-on-one interview with Andrew Young. He moderated a conversation with civil rights icon Julian Bond and Bernice King (daughter of Martin Luther King and Coretta Scott King). Two months later, he published an extensive story on the MLK/Springfield connection for The Atlantic, and followed that up with a live national television interview in New York on MSNBC. He is now working on his third book, an account of the 10 months and five days between the March on Washington and the signing of the Civil Rights Act.