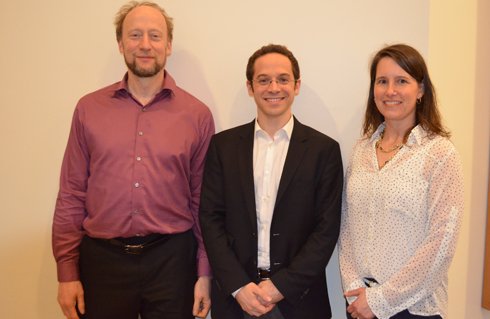 New York Times bestselling author David Epstein visited campus on Tuesday, April 15 speaking to Springfield College students in the Fuller Arts Center.  The event was co-sponsored by the Springfield College Exercise Science and Sport Studies Department, the Applied Exercise Science Club, and the Humanities Department.  The lecture was free and open to the public and Epstein signed copies of his book after the lecture.

Epstein is the author of the book, the Sports Gene, a New York Times bestseller that explores the science of extraordinary athletic performance.  In this controversial and engaging exploration of athletic success, Epstein tackles the great nature vs. nurture debate and traces how far science has come in solving this timeless riddle. He investigates the so-called 10,000-hour rule to uncover whether rigorous and consistent practice from a young age is the only route to athletic excellence. Along the way, Epstein dispels many of our perceptions about why top athletes excel. He shows why some skills that we assume are innate, like the bullet-fast reactions of a baseball or cricket batter, are not, and why other characteristics that we assume are entirely voluntary, like an athlete’s will to train, in fact have important genetic components.

An investigative reporter for ProPublica, Epstein writes about sports science, sports medicine, and Olympic Sports.  His science writing has won numerous awards, including the Society of Professional Journalists 2010 Deadline Club Award.  He has also co-authored several of Sports Illustrated’s most high profile investigative pieces, including the revelation that New York Yankees third baseman Alex Rodriguez tested positive for steroids in 2003.

In addition to his time with Sports Illustrated, Epstein has worked for the New York Daily News and Inside Higher Ed.  His writings also have appeared in Discover, Scientific American, Slate, The Washington Post, British GQ, National Geographic, and The Guardian.

Copies of Epstein’s book, the Sports Gene, are available for sale at the Springfield College bookstore and they also were sold at the guest speaking event.