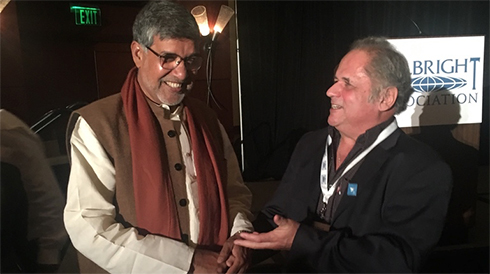 During the event, Wronka submitted four policy statements to the Council supporting the most recent United Nations Declaration on the Rights of Peasants; supporting the latest United Nations report on the global problem of illegal drug abuse; questioning the report of the United States before the Human Rights Council because it did not appear to address what could be considered welfare for corporate entities; and urging continual support for the universal periodic review process of the United Nations system  urging that supranational organizations, like the World Bank, International Monetary Fund, and the World Trade Organization receive the same scrutiny as nation states.

Along with his policy statements, Wronka also moderated a panel on the right to self-determination, sponsored by the World Muslim Congress and the Kashmiri Institute.  That panel dealt primarily with the situations in the Western Sahara, Kashmir and India, the Occupied Territories of the West Bank, and the state of Indigenous Peoples in the Kingdom of Hawaii.

“It was truly an honor and a privilege to be a part of the event,” said Wronka. “To be able to make policy statements before the Human Rights Council is very challenging, but rewarding, and actually an amazing experience."

Wronka also is known widely for his published works.  He has written four books, his most recent being Human Rights and Social Justice: Social Action and Service for the Helping and Health Professions (Sage, 2008). Replete with an instructor’s manual, it was recently designated as one of one hundred great books for the social worker’s library at MswOnlinePrograms.org.  He will soon come out with a second edition, this summer. He has also published in the Encyclopedia of Social Work, the International Encyclopedia of Social Work, the Handbook of International Social Work, the International Handbook of Social Justice, the Harvard International Review, the Journal of Moral Education, and the Humanistic Psychologist, to mention just a few. Wronka has presented his work in roughly 15 countries.