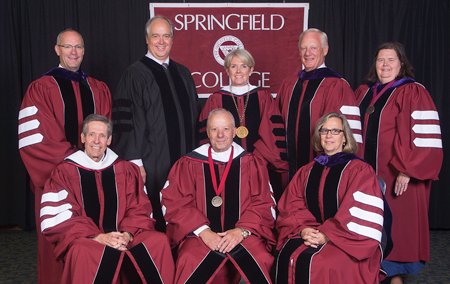 The Springfield College Board of Trustees recently announced the results of its 2014-15 board elections held during its annual meeting on campus.  Douglass L. Coupe of Bluffton, S.C., has been reelected as chair.

Coupe is the retired vice president of State Street Global Investor Services in Boston, Mass.  He earned bachelor’s and master’s degrees and a certificate of advanced study at Springfield College, and has been a member of the College’s Board of Trustees for 17 years.

Joining Coupe as reelected officers of the Board of Trustees for 2014-15 are Vice Chair Gregory Toczydlowski and Secretary James E. Walsh.  Toczydlowski, a resident of Granby, Conn., is the president for personal insurance for the Travelers Companies, Inc.  Toczydlowski earned his bachelor’s degree in business management from Springfield College in 1989.  Walsh is the retired co-founder of Baystate Environmental Consultants, Inc.  He is an East Longmeadow, Mass. resident and he earned his bachelor’s and master’s degrees in education from Springfield College.

Newly elected to the Springfield College Board of Trustees was James O’S. Morton, the president and chief executive officer for the YMCA of Metropolitan Hartford.

Moriah Billups of Barrington, R.I., was elected student trustee.  Billups is Rehabilitation and Disability Studies major with a concentration in medical rehabilitation.

Founded in 1885, Springfield College is known worldwide for the guiding principles of its Humanics philosophy—educating students in spirit, mind and body for leadership in service to others. With its foundation of academic excellence and rich athletic heritage, Springfield College prepares students with real-world leadership skills for careers that transform lives and communities. The college offers a range of undergraduate and graduate degree programs in the fields of health sciences, human and social services, sport management and movement studies, education, business, and the arts and sciences. It also offers doctoral programs in physical education, physical therapy, and counseling psychology. The college is ranked in the 2014 edition of “Best Colleges” in the top tier of “Best Regional Universities – North Region” by U.S.News Media Group, and is designated as a premier Leadership Development Center by the YMCA of the USA. More than 5,000 traditional, nontraditional and international students study at its main campus in Springfield, Mass., and at its School of Human Services campuses across the country.