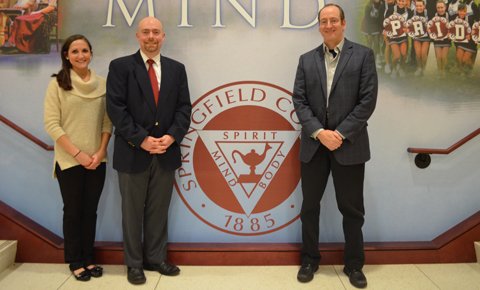 Tom Naughton, writer and director of Fat Head, the popular comedy-documentary about diet and health, was a guest speaker at Springfield College on Thursday, Dec. 12 in the Cleveland E. and Phyllis B. Dodge Room, located inside the Richard B. Flynn Campus Union.  Naughton’s guest appearance was presented by the Springfield College Center for Wellness Education and Research (CWER).

Naughton’s lecture was titled “Diet, Health, and the Wisdom of Crowds,” and explored the growing notion that social networking is a key factor in health care, particularly with respect to lifestyle-related issues.

An editor and writer for Family Safety and Health Magazine, a contributing writer for The Encyclopedia Britannica Health and Medical Annual, and a freelance humor writer for essays published in Newsweek and Omni, Naughton takes complex information about diet and nutrition and makes it both amusable and understandable to his audience.

Naughton’s lecture topics included “Big Fat Fiasco,” a theory that saturated fat and cholesterol cause heart disease is just that, a theory. That theory was based on bad science from the very beginning and has led to the epidemic of type 2 diabetes that is our biggest health problem today. Another lecture, “The Food Cops,” described how “consumer advocacy” groups like the center for science in the public interest created higher costs, tasteless food, and poor health.

Recently named director of the Center for Wellness Education and Research, Richard J. Wood, PhD, explained the presentation by Naughton was quite timely.  “Social media has undoubtedly had a major impact on how people address their health concerns.  I think all of us in the world of nutrition and health care need to listen to Naughton’s message before we are left behind the times.  The fact that he isn’t a health care provider, but rather speaks eloquently from the ‘crowd,’ is both unique and powerful.”