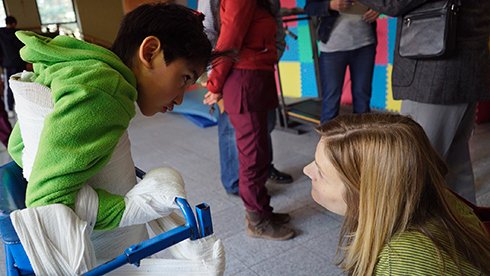 Springfield College Associate Professor of Communications Jody Santos hosted a film premiere for her documentary titled No One Left Behind on Monday, March 30, in the Fuller Arts Center. The event was free and open to the public.

Santos’ film chronicles the work of Disability Rights International (DRI), the first human rights organization to bring international attention to the millions of children and adults with disabilities who are locked away in orphanages, psychiatric wards, and other facilities around the world.

"This is one of the most heartbreaking stories I've ever had to tell,” said Santos, an award-winning journalist and documentary filmmaker who has been producing and directing documentaries for PBS and cable networks like Discovery Health and the Hallmark Channel since 2000. “The suffering and abuse I witnessed in institutions in the Republic of Georgia and Mexico stays with me today and has fueled my desire to make this film the best it can be. What we are talking about is an enormous waste of human potential, people languishing, essentially, in prisons because of the stigma of disabilities around the world."

Joining Santos at the premiere was DRI President Laurie Ahern and Executive Director Eric Rosenthal, who took part in a question and answer segment after a screening of the documentary. Based in Washington DC, DRI was established by Rosenthal in 1993 and the organization documents human rights abuses, publishes reports on human rights enforcement, and promotes international oversight of the rights of people with mental disabilities.