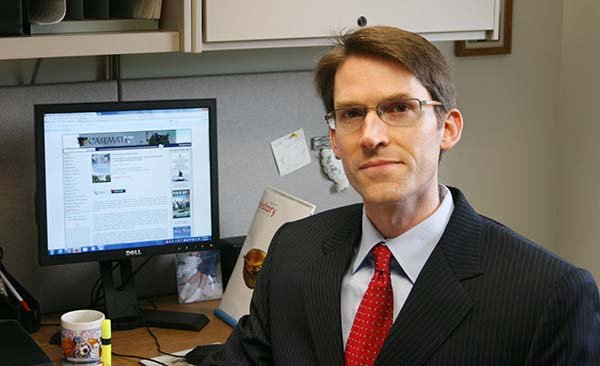 Springfield College is pleased to announce that Department of Social Sciences Chair Thomas Carty is one of a select group of faculty members nationwide chosen by the Council of Independent Colleges (CIC) and the Gilder Lehrman Institute of American History to participate in a special American history seminar on “Slave Narratives.”

The multidisciplinary seminar for faculty members in history, English, and related fields will use the slave narratives—as well as some other assigned secondary reading—to comprehend the lived experience of slaves themselves in the transition from bondage to freedom. From a pool of 83 highly competitive nominations, 27 faculty members were selected to participate in the seminar, which will be held at Yale University June 21–25, 2015.

In announcing the selection of participants, CIC President Richard Ekman said, “Strengthening the teaching of American history at colleges and universities is of critical importance. This seminar will provide a great opportunity for participating faculty members to gain a better understanding of the experience of emancipation and the 19th century events that were so important in shaping our world today. We believe that Carty will play a strong role in the seminar.”

“We are very proud of Tom Carty’s accomplishments, as both teacher and scholar,” said Springfield College Dean of the School of Arts, Sciences, and Professional Studies Anne Herzog. “His selection from such a competitive pool is quite an honor; it will enable him to strengthen and revise his own teaching of American history for Springfield College students.”

David W. Blight, class of 1954 professor of American history at Yale University, will lead the seminar. Blight is the author of American Oracle: The Civil War in the Civil Rights Era (2011); Race and Reunion: The Civil War in American Memory (2001), for which he won the 2001 Frederick Douglass Prize and the 2002 Bancroft and Lincoln Prizes; and A Slave No More: Two Men Who Escaped to Freedom, Including Their Narratives of Emancipation (2009), among other books.

Seminar participants will examine both antebellum and postbellum narratives. Before the Civil War approximately 65 narratives were published in English, many of them now classics. The pre-emancipation narratives were often serious works of literature as well as works that fit into certain conventions and formulas. They tended to focus squarely on the oppression of slavery and on a former slave’s indictment of the institution of bondage as a means of advancing the antislavery argument. The post-emancipation narratives, of which there are approximately 55 in existence, tended to be more success stories—triumphs over the past and visions of a more prosperous future. The most famous pre-war narrative is that of Frederick Douglass, and the most famous post-war narrative is that of Booker T. Washington. Seminar participants will read both of these and several other books, including A Slave No More, which reveals two unique postbellum narratives as a means of understanding the experience of emancipation itself.

The seminar is generously funded by the Andrew W. Mellon Foundation.

For more information, visit the CIC website at www.cic.edu/AmericanHistory.

Participants in the 2015 CIC-Gilder Lehrman Seminar

The Council of Independent Colleges is an association of 750 nonprofit independent colleges and universities and higher education affiliates and organizations that has worked since 1956 to support college and university leadership, advance institutional excellence, and enhance public understanding of private higher education’s contributions to society. CIC is the major national organization that focuses on providing services to leaders of independent colleges and universities as well as conferences, seminars, and other programs that help institutions improve educational quality, administrative and financial performance, and institutional visibility. CIC conducts the largest annual conference of college and university presidents. CIC also provides support to state fundraising associations that organize programs and generate contributions for private colleges and universities. The Council is headquartered at One Dupont Circle in Washington, DC.

The Gilder Lehrman Institute was established in 1994 to promote the study and the love of American history. The Institute organizes seminars and enrichment programs for teachers; supports and produces publications and traveling exhibitions; sponsors lectures by eminent historians; develops electronic resources; creates history high schools and extracurricular history programs; and founds research centers at universities and libraries.