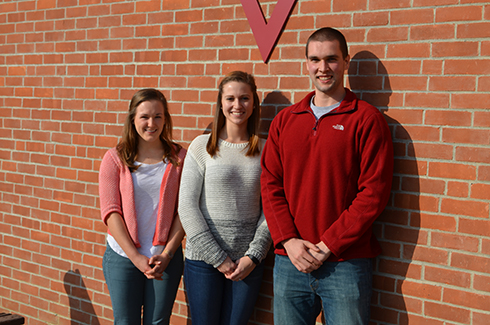 All three students have enjoyed success while at Springfield College, but each has found the passion for their desired career professions in different ways since graduating high school.

For Batchelder, it was a situation that occurred during 11th grade when he started to have a vision into what he wanted to explore as a potential career choice.

“I was an average student in high school, and I ended up missing about a month of school due to a surgery I had, and it was after the surgery where it all starts for me,” said Batchelder. “I had a tutor helping me get caught up with my school work, and following surgery, I had a new focus, and physical therapy ended up being a strong focus for myself.”

Meeting the requirements to be accepted into the Springfield College Physical Therapy Program can be challenging, but thankfully Batchelder learned quickly there were options at Springfield College, and one alternative was the health science option.

“The health science major for me was the perfect fit,” said Batchelder, who was one of approximately 85 individuals accepted into the doctoral program in physical therapy at Duke University out of an application pool of 1000. “It has been challenging, but I entered the program with a chip on my shoulder to maintain a strong focus, and to keep pushing. The professors have been amazing, they help so much and they play a huge role in the success of the students at Springfield College.”

Similar to Batchelder, Cooley also had an eye on physical therapy, and she actually started her academic career at Springfield College in the physical therapy department. Two weeks into her junior year, Cooley realized she might have found a new passion in her career choice.

“I was actually in the same biostatistics class as Andrew, and I started to realize I may want to make a change,” said Cooley. “I really enjoyed biostatistics, and I wanted to have that be my focus. But, I was nervous, I was already heavily involved in the physical therapy program, so I wasn’t even sure if it was possible to make the transfer to biostats.”

Through the help of Springfield College Professor of Disability Studies Joseph F. Stano, Cooley was able to make the transition without an issue, and continue to explore her dream.

“Professor Stano was amazing and I am so appreciative of his support,” said Cooley. “I couldn’t have made that transition without the help of Professor Stano and his leadership.”

Cooley has been a standout in the classroom while at Springfield College receiving only one course grade below an “A” in three years, and that grade was an “A-”. Because of her dedication and hard work, Cooley will most likely be accepted into many of the top five biostatistics programs in the country.

Scoble left high school with the mindset of pursuing a career as a radiologist with specialized training in obtaining and interpreting medical images obtained by using x-rays. She enrolled at Holyoke Community College following high school graduation, and quickly started interacting with students who were studying for a career in occupational therapy, an area of study that she found very interesting.

“Coming out of high school, I was unsure of what profession I wanted to do in the health field and my time at HCC helped me figure that out,” said Scoble. “I wanted to be a radiologist for a long time, but during my time at HCC, I took a class that got me thinking more about the other health professions out there.”

Scoble enrolled at Springfield College as a transfer student, and quickly applied herself to her studies and through a strong work ethic, started to make an impression on her peers within the health science program. Her hard work has paid off as she now has the opportunity to be admitted to many of the top occupational therapy graduate programs in the country, with Columbia University at the top of her list.

“Springfield College and the faculty in the health science program deserve so much of the credit for preparing us for the next step,” said Batchelder. “They always make time for us as students, and we always feel like we can go to them with any questions, and we always receive so much tremendous support. We can’t thank them enough as students.”