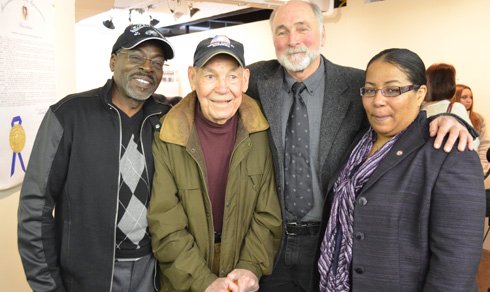 A reception celebrating the illustrations of Gerald Purnell took place at Springfield College on Sunday, Feb. 9, in the William Blizard Gallery.  Purnell’s work is featured in Springfield College School of Human Services Professor Richard Andersen’s new book, “A Homerun for Bunny.” The event is part of a program at Springfield College honoring the 50th anniversary of Martin Luther King Jr.’s commencement address at the College.

Purnell’s illustrations help tell the true story of a remarkable young baseball team from Springfield, Mass., faced with an incredibly difficult decision.  Set in 1934, the story focuses on the most talented member of the team, a boy named Bunny Taliaferro, the only African-American on the roster, facing racial prejudice during the Eastern Regionals in Gastonia, N.C.  The boys on the team had two choices while playing in Gastonia; continue to fight for victory without Bunny, or stand up for loyalty, equality, and respect by refusing to play.  The team decided that if Bunny wasn’t allowed to play, they were going home.

Joining Purnell at the reception was the captain of the baseball team, Tony King, and also the Amandla Chorus.  Founded in 1988, the Amandla Chorus is a singing community based in Greenfield, Mass., that performs for justice, freedom, and peace. The name Amandla comes from the Zulu word for “power.”  The chorus played for Nelson Mandela after his release in 1990.