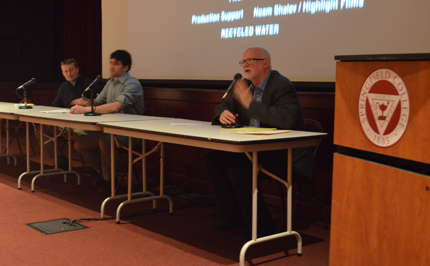 Brilliantly depicting the truth about the global water crisis, Academy Award-winning director Jessica Yu and her Academy Award-nominated producer Elise Pearlstein delivered nonfiction filmmaking at its engaging, informative, and fast-flowing best. According to a review in The Globe and Mail, Last Call at the Oasis features “gorgeous cinematography and graphics, a killer soundtrack, and flashes of humor” including an appearance by Jack Black, as well as activist Erin Brockovich.

Also featured were experts including Alex Prud’homme, whose book, The Ripple Effect, inspired the film. Film critic Amy Biancolli writes that the major impact of the film is that “there’s no escaping its creeping pile-up of evidence that Mother Earth is critically dehydrated—and we need to do something fast!”

Following the presentation of the film, there were commentaries by special guests David F. Mitchell, Ph.D., Jonathan Parrott, Ph.D., and Scott Steinschneider, as well as a question and answer session following the film.