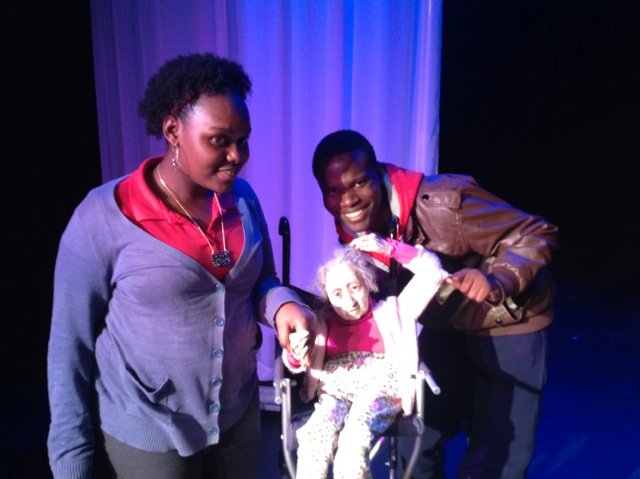 In the photo above are Vari Hatungimana (left) and Evette Niyokwizera (right) from the First Generation Ensemble of The Performance Project, who attended the theater performance.

Springfield College hosted the Sandglass Theater’s award winning production, D-Generation: An Exaltation of Larks, on Wednesday, March 12, at the Fuller Arts Center. The performance was part of the 2014 William Simpson Fine Arts Series.

The performance explored the lives of individuals with late-stage dementia through storytelling.  Performed by three puppeteers as the caregivers and five puppets as the residents of a care facility, audience members were walked through stories that featured the humorous, playful, and sometimes dark sides of dementia.

Sandglass Theater’s performers collected the stories during 20 visits to care facilities, where people with dementia were guided through a story-making process called Timeslips.

The evening was funded in part by the New England Foundation for the Arts’ National Theater Project, with lead funding from the Andrew W. Mellon Foundation.