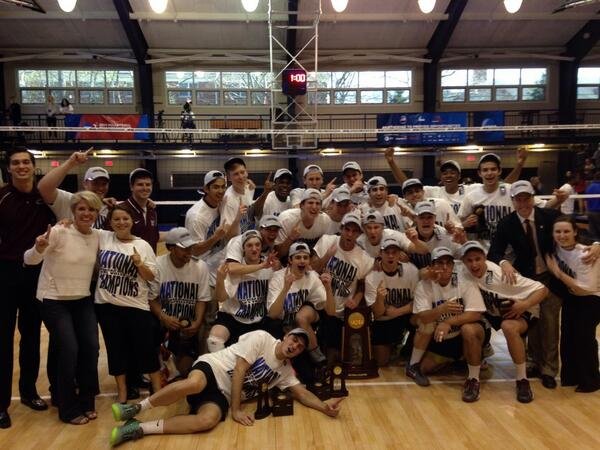 Huntingdon, Pa. – The Springfield College men's volleyball team captured its third-straight NCAA Division III National Championship on Sunday afternoon after a three-game sweep of host Juniata College. Set scores for the Pride were 25-20, 25-21, 25-21. Springfield wrapped up the season with a 27-8 record, including a 26-3 mark in Division-III play. The Pride put on an offensive show in the championship match, hitting .431 as a team.

Luis Vega (Corozal, Puerto Rico) was named the NCAA Most Outstanding Player for the second-straight season as he erupted for 17 kills at a .367 clip while notching a match-best four blocks. Teammates Keaton Pieper (Dallas, Texas) and Jimmy O'Leary (Reading, Pa.) were named to the All-Tournament team as Pieper delivered 39 assists and O'Leary dominated the middle with 13 kills on a remarkable .750 hitting percentage.

Today’s rivalry showdown pitted the two most storied Division III men’s volleyball programs, as the squads have combined to win 15 of the last 18 national championships, with the Pride winning nine of them. Seeing each other for the first time this season, this season marked the first time since 1997 that Springfield and Juniata did not meet in the regular season.

Springfield and Juniata had met just once before in a national championship match, which came in 2003 when the Pride won in four sets in Huntingdon. That win for Springfield proved to be the capstone of a national-championship three-peat as it previously captured the Molten Invitational National Championship in 2001 and 2002.

After a back-and-forth start the match, the Pride used consecutive Eagle attack errors and an Angel Perez (Naranjito, Puerto Rico) kill to earn a 16-14 cushion. A Vega ace pushed the Pride’s lead to 22-18, and after O’Leary converted in the middle for set point, Perez crafted a tip kill around the Juniata block to take the opener, 25-20.

The opening set featured 10 ties, but the Pride was able to hit .478 in the frame, thanks to four kills each from Perez and O’Leary. The second set proved to be just as tight, as it featured 11 ties, but the Pride’s offense continued to roll, hitting .478 once again. After Juniata scored the first three points of the frame, Springfield poured on a 7-1 surge, highlighted by three thunderous blocks from Vega, including back-to-back solo stuffs.

With the score knotted at 17, three-straight Juniata miscues allowed the Pride to gain a three-point cushion. The Eagles would get as close as two, only to have Sean Peterson (Norfolk, Va.) put away his only kill of the match for the 25-21 victory. O’Leary was unstoppable, producing kills on all six of his swings, while Vega cracked seven kills.

O’Leary kicked off the third set with a big swing in the middle and the Pride never looked back as it led the entire stanza. With Springfield leading 15-11, Juniata answered back with the next three points to get within one.

Perez came through once again, siding out with a critical kill, which kickstarted a 4-0 surge to put the Pride in control, 19-14. The hosts made another burst to make things interesting, scoring five of the next seven points to force the Pride its second timeout.

However, Ryan Malone (Chicopee, Mass.) came off the bench and delivered a huge kill off the block to stem the Eagle tide. Juniata answered back with two-straight blocks to make it a one-point game, but the Pride would not be denied as it scored the find three points to earn their third-straight title.

Perez elevated for the Pride’s final kill of the match and back-to-back Juniata errors allowed the Pride to take the match, 25-21. Vega closed out the final set with another seven kills to cap off his second-straight Most Outstanding Player performance.