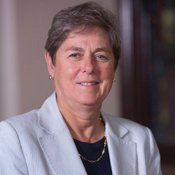 The award is named after longtime leader and supporter of the NEASC, Jacob Ludes III.  The honor recognizes volunteers within the NEASC who demonstrate leadership qualities that further the goals and objectives of the association.  The recipient of this award is one who has created, led, managed, or developed a program, project, or activity that has productively impacted the association or one of its commissions in a given year.

Wyld was recognized for her committed work as chair of the Commission on Institutions of Higher Education (CIHE) of the NEASC.  As chair of the CIHE, Wyld provides leadership for the commission in its work of developing and applying the standards for accreditation that govern the nearly 300 public and private colleges and universities in New England and abroad accredited by NEASC.  She also joined the NEASC board of trustees to represent the needs of higher education in the New England region and to external groups.