Humanics in Action: Springfield College prepares for a safe return to campus.  Get complete details and updates 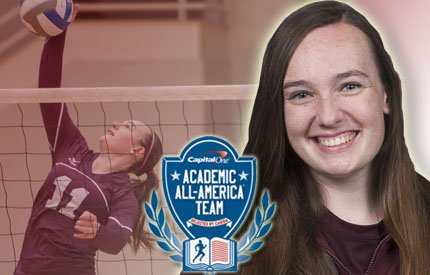 Smolinski, a senior outside hitter, was selected as the top player in the nation, in terms of both athletic and academic accomplishment as the Communication Sciences and Disorders major currently owns a perfect 4.0 cumulative grade point average. She is a three-time New England Women’s and Men’s Athletic Conference (NEWMAC) Academic All-Conference honoree, a two-time Capital One Academic All-District® choice, and follows up last year’s Capital One/CoSIDA Second Team Academic All-America® selection with First Team Academic All-America® honors this season.

During her time at Springfield College, Smolinski has led the Pride to unprecedented success for the program on the national level. Springfield has made four consecutive trips to the NCAA Division III Championship, and won NEWMAC Championships in both 2011 and 2013. A four-time NEWMAC All-Conference honoree, including three-first team selections, Smolinski capped off her career by earning NEWMAC Athlete of the Year honors this season. In addition, she became the first player in the program’s Division III history and just the second player overall to repeat as an AVCA All-American after receiving second-team accolades the past two campaigns.

Smolinski was previously recognized on a national level for her success both on and off the court when the Pride advanced to the NCAA Division III Championship Elite Eight in 2011 in St. Louis. While there, she was given the prestigious NCAA Elite 89 award, which is presented to the student-athlete with the highest cumulative grade-point average participating at the finals site for each of the NCAA’s championships.

In her four seasons in Maroon and White, Smolinski led Springfield to a 118-22 record, totaling 1,556 kills and 1,355 digs, both of which totals rank in the top five in program history.

"This is a tremendous accomplishment for Tessa because she epitomizes the Division III philosophy. She's the perfect example of a Springfield College student-athlete, as she represents all that we stress; the importance of excellence on the court and in the classroom,” said Springfield College head women’s volleyball coach Moira Long. “She truly is the gold standard when it comes to Division III athletics."

To be eligible for Academic All-America® consideration, a student-athlete must be a varsity starter or key reserve, maintain a cumulative G.P.A. of 3.30 on a scale of 4.00, have reached sophomore athletic and academic standings at his/her current institution and be nominated by his/her sports information director.

Since the program's inception in 1952, CoSIDA has bestowed Academic All-America honors on more than 19,000 student-athletes in Divisions I, II, III and NAIA, covering all NCAA championship sports.