Major or Minor
Bachelor of Arts

In our dance major, you’ll develop your individuality, creativity, dance knowledge, and technique while preparing for a career in dance, a related field, or graduate programs in dance education, dance/movement therapy, somatics, or similar studies.

You can combine dance with other areas of study, such as psychology, to further prepare yourself for a career in dance education or therapy. Or, you can take courses in management and economics to prepare for a career as a dance studio owner.

See below for more information on the audition process for our dance program.

Take a look inside the Dance Program at Springfield and what makes it unique.

LIFE AS A DANCE MAJOR
Study what you love

Have a passion for dance? Students in this major study dance in depth and prepare for a career in dance or a related field. Read about Alexandra MacPherson's '21, DPT '23 experience as a double major in Dance and Physical Therapy.

LIFE AS A DANCE MAJOR
Get moving

Dance students are often involved in performances that are part of our William Simpson Fine Arts Series.

LIFE AS A DANCE MAJOR
Enjoy your studio

As a dance major, you'll be able to practice in our expansive dance studio space, right on campus.

LIFE AS A DANCE MAJOR
Pursue your passion

The dance major gives students many opportunities to develop their individuality, creativity, dance knowledge, and technique.

Be a part of an evening to remember at Springfield College as members of the dance program present their first-ever socially distanced "Drive-in" Dance Concert. The concert will feature exciting new works by student choreographers in varying styles such as tap, hip-hop and contemporary. View this free dance concert from the comfort and safety of your vehicles in parking Lot 9. Or, if you are a student, enjoy the show from our socially distanced designated seating area.

You must register online in advance to reserve your parking spot. Parking spots and seats are limited.*

*Please note: space is limited per performance, and you may be placed on a waitlist if the performance is full. You will be contacted by email if the show you have chosen is full. If you have registered for a performance and can no longer attend, please contact Sarah Zehnder, Director of Dance, at szehnder@springfield.edu. 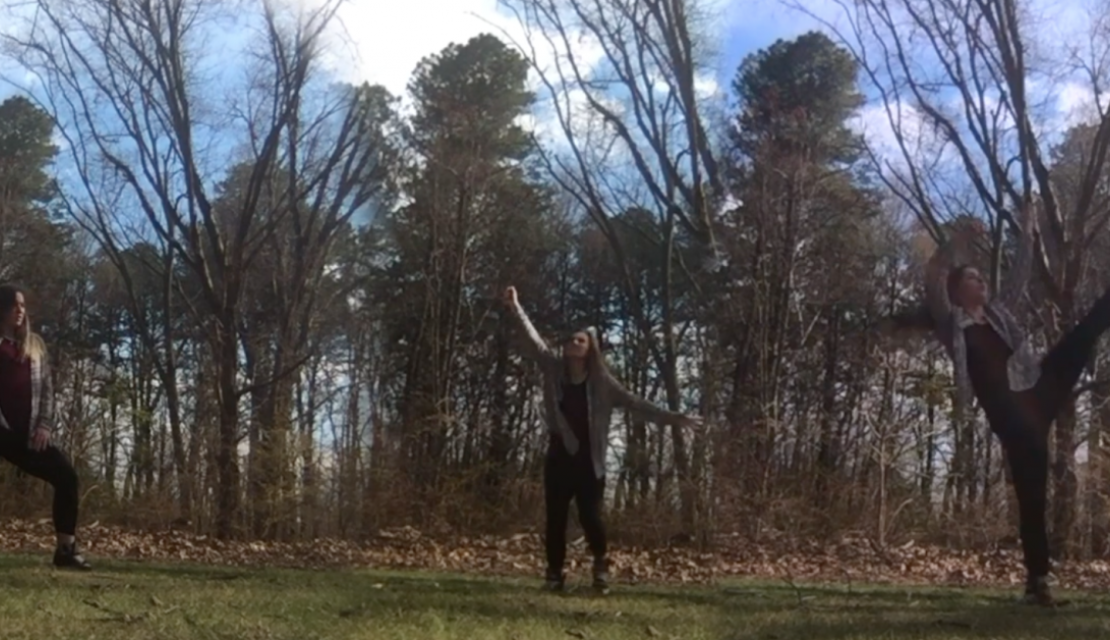 Springfield College Dance Professor Sarah Zehnder led her students in her Repertory Dance class through a community dance project in which dancers interviewed seniors currently isolated, creating gestural movements from their answers, teaching the senior the movements via zoom or facetime, and doing some video editing to create a duet.

From the interviews with the isolated participants, the students created gestures from their stories, taught their interviewees the gestures and recorded the movements, and created a larger movement phrase from these gestures for themselves and pasted it together as one dance. This project is another example of the art of Dance being powerful, healing, and bringing communities together.

Dancers Against Racism Series: Move for the Movement
Spring 2021

This spring, the Springfield College Dance program invites the community to join in virtual events led by guest artists using dance as a platform and lens to explore culture, identity, and community. Classes will consist of both movement and discussion.

All classes and discussions will be accessible via Zoom.

In 2007, seven African dancers came together to learn the art of the drum to enhance and improve their dancing. The sisters were led by Tosha “Ayo” Alston and the seed of Ayodele Drum & Dance was planted. Ayodele, a Yoruba word meaning “Joy in the home,” is now a diverse sister-circle of performing artists committed to studying and performing drum and dance as a healing element. The group has grown from that circle of seven to more than 20 Queens, including Gaitors, who use African drum and dance to educate and motivate young women and children.

Jean Appolon is director and co-founder of Jean Appolon Expressions (JAE), which celebrates and advances Haitian folkloric dance through their contemporary cultural community that produces professional performances, educational opportunities, and dance training for people of all ages, abilities, and backgrounds.

He seeks to create a diverse community inclusive of all cultures, races, and backgrounds, and to use dance and community to transcend barriers. The company dancers bring years of experience in education, and frequently perform in community spaces, major venues, and at schools and colleges. Members have shared the stage with celebrities, including Danny Glover, Henry Louis Gates, and Edwidge Danticat.

Appolon is a choreographer and teacher based in Boston and Haiti. He trained and performed with the Viviane Gauthier Dance Company, the Folkloric Ballet of Haiti, Alvin Ailey, and the Joffrey American Ballet School. Appolon teaches at Boston Ballet and The Dance Complex.

Randi Henry is an instructor, dancer, and managing partner for SambaViva Brazilian Dance and Music Ensemble in Boston. She teaches samba and Afro-Brazilian dance in the greater Boston area, and has been teaching dancers, students, and Brazilian cultural enthusiasts for more than 16 years. Henry discovered her passion for samba and Afro-Brazilian dance while studying at Tufts University, and then continued to expand her repertoire through her involvement with the Brazilian Cultural Center of New England and travel throughout Brazil. She has participated in parades with Rio de Janeiro samba schools, including for the carnival procession and performance at the Brazilian Samba Congress.

Henry has trained with local Brazilian artists in the Boston area and has traveled to Brazil (Rio de Janeiro, Sao Paulo, Bahia), New York, Toronto, Los Angeles, Arizona, San Francisco, and Paris over the years for ongoing training and mentoring. To convey the joy of samba to others, she performs professionally in the SambaViva Dance Troupe based in Cambridge, Mass. She also teaches classes at the Dance Complex and the Jose Mateo Ballet School in Cambridge. She is American with a Brazilian heart, according to her friends and fellow dancers, and expresses her love of Brazilian culture through dance.

Telly Jaswan Fowler began his dance training at the age of 16 on scholarship with the Joseph Holmes Chicago Dance Theater under Randy Duncan's direction. Upon graduating from Curie Metropolitan High School of the Performing and Creative Arts, Fowler received his Bachelor of Fine Arts in dance performance from The Ohio State University and his Master of Fine Arts in dance performance and choreography from the New York University Tisch School of the Arts. Fowler was a principle with the renowned Ronald K. Brown Evidence, A Dance Company. While there, he also took on the role as rehearsal director and assistant to choreographer in setting such works as the critically acclaimed "Grace" and "Serving Nia" for the Alvin Ailey American Dance Theater and "No More Exotica" for the Philadelphia Dance Company. He also has worked with some of the most distinguished choreographers of our time, including Camille A. Brown, Earl Mosely, Kevin Vega Geoff, Gary Abbot, Donald Mckayle, and Irene Hultman. He teaches an array of dance classes and sets his choreography at universities and communities near and far. Fowler is currently pursuing a master's in public administration at Metropolitan College of New York.

Growing up in Poughkeepsie, N.Y., Douglas has always had a profound love of the arts. She first explored this love of dance extensively, and is multi-faceted in many styles, such as tap, jazz, ballet, lyrical, hip-hop, dancehall, and more. Dedicated to her love for dance, she continued her education at The College at Brockport, State University of New York. Upon completing her degree, she moved to New York City where she trained and studied commercial dance at Broadway Dance Center through its Professional Training Semester. This opportunity led her to further expand her skills and work with many industry choreographers, including Ryan Huffington, Dana Foglia, Luam, and Jae Blaze.

By cultivating such a deeper understanding of the arts, Douglas knew it was time to expand her skills and follow her dreams and move to Los Angeles, where she currently resides. She has been blessed with the opportunity to have been featured on Farfetch Christmas campaign, Keno x H&M fashion show, and the Vogus edition on Millennium Dance Complex, which was focused on women in the commercial industry. She also subs at Millennium Dance Complex teaching under her mentor, Jae Blaze. Douglas is a passionate and driven individual who loves what she does. Her mission is to share her findings with those who wish to grow and enjoy movements of the body.

is deeply dedicated to the study of movement and the body. Formerly, as a member of the Trisha Brown Dance Company, she performed and taught throughout the USA and Europe. Her work has been presented at numerous theatres in Germany, France, and the United States.  She has guest taught at Bard College, Smith College, Julliard College, and Keene State College.  She is the director of Studio rEvolution, in Florence, MA.  A Certified Practitioner of Body-Mind Centering, her studio is the home of her private bodywork practice, Embodied Healing.

was a University of Massachusetts Amherst Chancellor’s Award recipient and received her certificate in ballet Pedagogy from the Hartt School (The University of Hartford through The Hartford Ballet) and is trained in the Vaganova technique. Combining dance and fitness has become a passion and she is certified in all forms of Zumba, Barre Method, and Hoop fitness. Angela has been teaching for over 20 years all over New England, including in her own studio The Dance Studio of Wilbraham,  where she has been the artistic director for 18 years.

Originally from Washington, D.C., Tara grew up studying ballet and theater. She earned her B.A. in theater and religious studies at Yale University.  At this time Tara also began exploring her heritage through African studies and was awarded a fellowship to study traditional dance and drumming at the University of Legon in Ghana, West Africa. For the past 25 years, she has studied closely with many African and Afro-Caribbean artists in Washington, D.C., New York City and Boston. Her primary mentors have been Issa Coulibaly and Joh Camara of Mali; Mohamed Kalifa Kamara of Guinea; Fatou N’Diaye and Astou Sagna of Senegal; and Jean Appolon of Haiti. In addition to African dance, Tara has also practiced yoga and meditation since she was a child. Tara recognizes the practice of African dance and drumming as a tremendous force for healing, meditation, empowerment, and community. It is her greatest honor to share the inspiration of these ancient traditions.

The William Simpson Fine Arts Series entertains and inspires. Experience the arts with magnificent work from artists and performers from both inside and outside the Springfield College community. Attendees will be dazzled by dance performances and theater presentations, captivated by art exhibitions and thought-provoking film, and delighted by concerts and literary events.